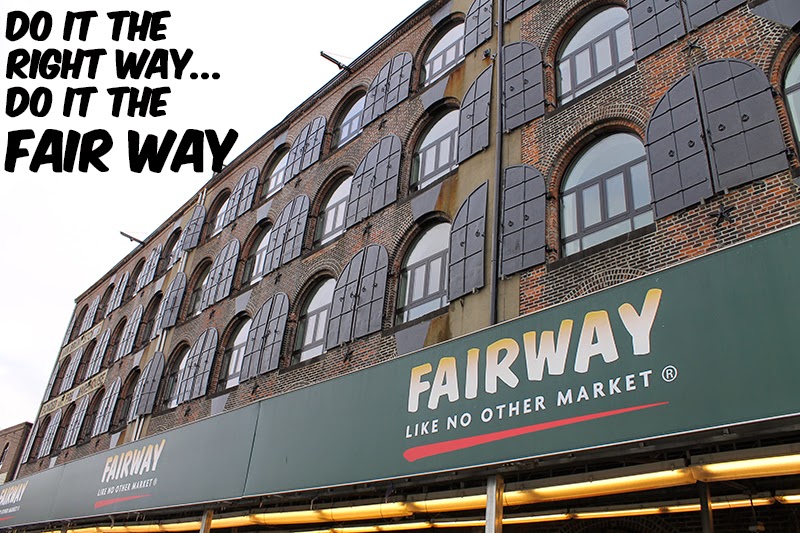 UFCW Local 1500 members at Fairway are gearing up for their first labor negotiations under Fairway Market’s new CEO, Jack Murphy. 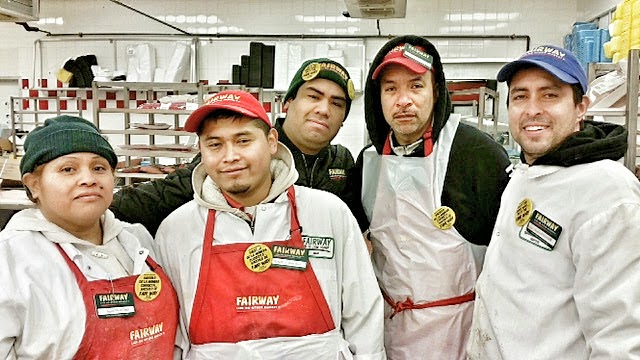 “We’ve had a long history of excellent labor relations with Fairway,” said Assistant to the President Rob Newell, “In the past, Fairway has always respected its workers during the negotiation process, and together we’ve raised the bar to create a contract seen by many as an industry standard,” Newell concluded.

Murphy took office in September of 2014 and has pledged new marketing campaigns, more 'robust growth' and vowed to ‘put the swagger back’ in Fairway's 15 stores. 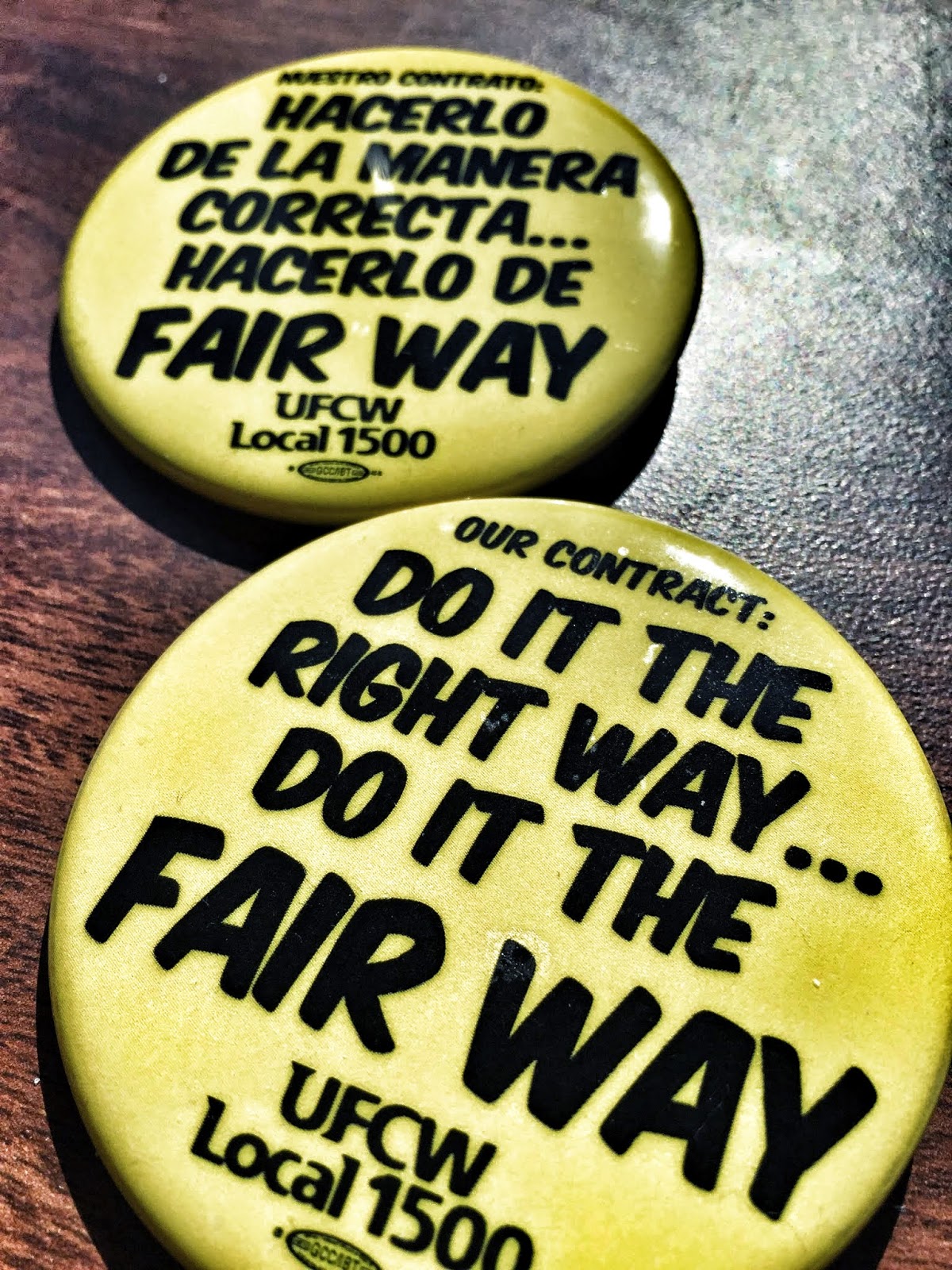 At February’s Contract Proposal Meetings, Fairway members packed rooms in Long Island and Manhattan with one message, a fair contract. “It’s important for all Fairway members to stay extremely aware and active in these contract negotiations. We will set the tone for what future collective bargaining agreements look like for a growing company,” Newell explained, “We’re hopeful that we’ll reach another excellent agreement that will benefit both sides,” Newell explained, “We’re just making it known to management that our members working at Fairway are like no other members,” Newell concluded.

The 80-year-old company was founded by the Glickberg family, which was the largest shareholder until 2007, when Sterling Investment Partners took a controlling stake. The private-equity firm made a $150 million investment. Howard Glickberg, a grandson of the founder, is vice chairman of development. 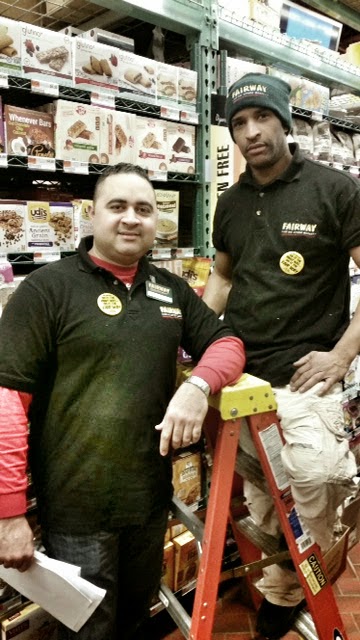 UFCW Local 1500 members have been wearing buttons telling the company to negotiate their contract "the right way...the Fair Way".  "Members have been loving the buttons and eager to show their strength and solidarity," said NYC Fairway Union Representative Teresa Aponte, who has been distributing the buttons this week.  "It's important to show the company we want a fair contract, and Fairway members want it done the fair way."

Murphy has big plans for Fairway, he believes over the next three to five years Fairway can open 15 to 20 stores in the New York tri-state area, including more suburban locations.  With roots in Boston, he told Supermarket News, "before we even think about other parts of the country, the greater Boston area could offer growth opportunities at some point."

The agreement between UFCW Local 1500 and Fairway Market covering over 2,400 men and women expires on March 29, 2015.  Stay updated on negotiations, actions and events by signing up here. 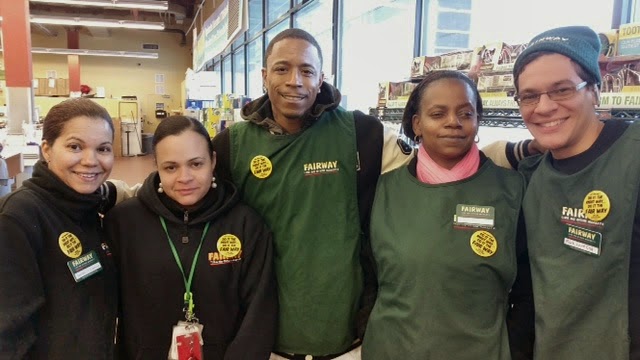 FEATURED
Wisconsin Lawmakers Pass Right-to-Work Laws as Thousands Protest
Republican leaders chose to fast-track the bill in what's known as an extraordinary legislative session, allowing for less debate than usual.
Debate over the bill drew thousands of protesters to the state Capitol on Tuesday and Wednesday, reminiscent of the passionate labor demonstrations surrounding Act 10 in 2011. But as with that earlier legislation, which stripped most collective bargaining rights from public-sector employees, vocal opposition from the state's unions wasn't enough to stop the right-to-work bill in its tracks. Read more.
This is another step in the direction of slashing wages and destroying labor unions. 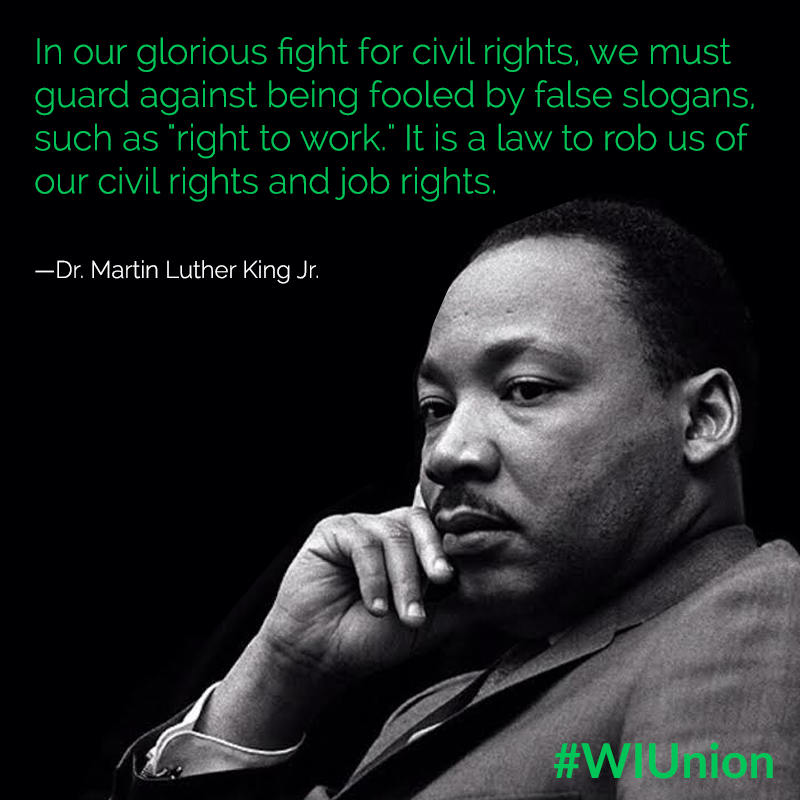 Last week Walmart bowed to the public pressure and to the tireless organizing of workers and announced a wage boost for nearly 40% of its workforce. Make no mistake, this is a win for our movement and for retail workers across the board. We still have a ways to go.

President Both released the following statement regarding the increases:

“This announcement confirms the unmatchable power workers hold when they band together to demand respect from their employer.

“Walmart workers have been relentless, fighting for decades for respect and better working conditions.   However, we have heard many empty promises from Walmart, and today, there are real questions about whether the company is really committed to improving jobs or simply seeking to quiet the concerns of OUR Walmart members, investors, shoppers and taxpayers.

"We don't know what this means for our hours – as more and more workers report that they are not getting the hours they want and need.  The truth is that this raise, especially without any guarantee of hours, is a promise that falls short of what we need to feed our families."


Here's an update on all current union contract negotiations:

King Kullen & Stop & Shop:
Tomorrow, February 19th, Union Trustees will meet again with company Trustees to resolve Pension and Welfare benefits.  As we previously updated, progress continues to be slow, and this has stalled the negotiation process.  President Both and Secretary-Treasurer Speelman indicated all Union Trustees will continue to demand that employers pay the appropriate level of contributions necessary to responsibly maintain benefit plans.

Fairway Market:
A new era began at Fairway Market in September with the introduction of new CEO, Jack Murphy.  We'll begin our first negotiations with the new leadership on Friday, February 20th.  We expect CEO Murphy and other operating officers to be in attendance for the duration of negotiations.  These negotiations are crucial in setting the tone for the future of our collective bargaining agreements with Fairway Market, an emerging company throughout the Northeast.

D'Agostino's:
Negotiations have yet to begin, although our contract proposal meeting is scheduled for Thursday, February 26th at 7PM at the Holiday Inn on West 57th Street.  All D'Agostino's members should attend with their proposals for the next collective bargaining agreement.


We'll be keeping you updated digitally through emails, our social networks and on our website ufcw1500.org.   If you know any coworkers that would like to be on our Contract Update list, please sign them up here, or tell them to send us an email.

Please reply to this message with any questions, comments or suggestions.

FEATURED
McDonald's $9 million Super Bowl ad shows customers paying with love...Maybe they should show employees some McLovin'?
In December McDonald's workers took to the streets to protest low wages, dreadful working conditions, and no stability.  The $9m McLovin' ad, isn't fooling anyone in the press, and really don't make sense to employees who have an open civil rights suit against the company . Heck, even Managers are admitting to Wage Theft, it's a bad time to be a clown.

Protesters gathered in front of Walmart heiress Alice Walton's Park Avenue apartment in NYC this week, demanding Walmart ends retaliation against its workers.  Follow #walmartstrikers for more photos and info.
12. NYC Construction Workers March Against Junk Jobs
13. World's Email Encryption Software Depends on One Guy, Who is Going Bankrupt
The man who built the free email encryption software used by whistleblower Edward Snowden, as well as hundreds of thousands of journalists, dissidents and security-minded people around the world, is running out of money to keep his project alive.
14. Unions Re-Powering Civil Rights  Movement & Protests: Black History Month
During the recent wave of protests around the nation over the killing of unarmed blacks by police, an old ally has reemerged to march in step with African-Americans seeking justice — organized labor.
Elsewhere NYC News:
LSSA 280 is on Strike. On January 30th,  MFY union members voted to reject the unreasonable contract offered by MFY management, and are now on strike. Please join our MFY members on the picket line: The union will be picketing MFY, 299 Broadway in lower Manhattan, Monday through Thursday from 8:30am-10am.
Thank You:
It's often a thankless job, so we'd like to say, thank you. And thank you for being a subscriber. 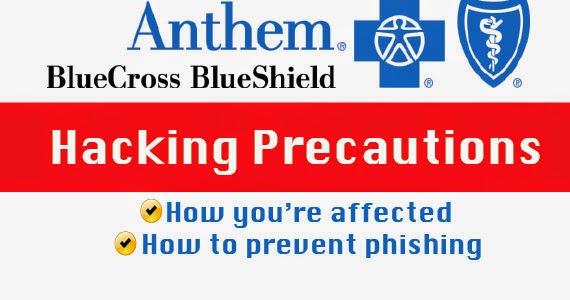 This is an urgent message from our health provider, Blue Cross/Anthem, which as you may already know, fell victim to hackers earlier this week. A possible 80 million sensitive customer records were breached by hackers.


New York residents who may have been impacted by the cyber attack against Anthem, should be aware of scam emails campaigns targeting current and former Empire BlueCross BlueShield and Empire BlueCross members.
These scams, designed to capture personal information (known as “phishing”) are designed to appear as if they are from Anthem, (Empire’s parent company), and the emails include a “click here” link for credit monitoring. These emails are NOT from Anthem or Empire.
Empire also is NOT calling members regarding the cyber attack and is not asking for credit card information or social security numbers over the phone.
This outreach is from scam artists who are trying to trick consumers into sharing personal data. There is no indication that the scam email campaigns are being conducted by those that committed the cyber attack, or that the information accessed in the attack is being used by the scammers.
Empire will contact current and former members via mail delivered by the U.S. Postal Service about the cyber attack with specific information on how to enroll in credit monitoring. Affected members will receive free credit monitoring and ID protection services.

For more guidance on recognizing scam email, please visit the FTC Website: http://www.consumer.ftc.gov/articles/0003-phishing. Additional information about the cyber attack against Anthem is available at www.AnthemFacts.com.

If you have ANY concerns or questions, contact your Union Rep. asap.