What Happened This Week: Top 11 Stories: CNN is Anti-Union? UAW Pushing in Tenn.

CNN Ordered to Rehire 100 Employees by NLRB
Did you know CNN was anti-union? The 11-year dispute stems from CNN’s decision to replace a unionized subcontractor called Team Video Services, which provided the network with audio and video technicians, with an in-house nonunion work force in its Washington and New York bureaus.

UAW Plans another Push at VW Plant in Tennessee
After losing a closely contested election earlier this year, the UAW and workers aren't retreating, they're responding.

Image of Week via UFCW Local 400

Actor Vicki Lawrence, in a 1985 UFCW campaign: "Unions stand up for what people need—good salary, reasonable job security, appreciation for a job well done, and a chance to use their abilities—and United Food and Commercial Workers International Union is one of the best unions!"

1. A&P Completes Debt Refinancing
The company has completed a refinancing of its existing senior debt — a covenant-free arrangement the company said “provides for a significant reduction in interest expense and enhanced liquidity and reflects the debt market’s confidence in [its] ongoing progress and prospects for future growth.”

3. Demonizing the Minimum Wage
The New Yorker explains why the fight to raise the minimum wage has become a dividing political issue in Washington, when it should just be the right and obvious thing to do.  The federal minimum wage has never been indexed to cost of living, and over 73% of Americans want the minimum wage raised to $10.10.

4. Walmart Imposes Fake Sugar Tax in NY, Overcharges Customers for Sodas, Fined $66k
The attorney general’s office says the retail chain launched a national sale in June advertising Coca-Cola 12-packs for $3, but consumers at 117 Wal-Mart stores in New York were routinely charged $3.50.
Investigators say consumers who complained were falsely told the state has a “sugar tax.” They say the markup of more than 16% violated two laws.

7. Walmart Heirs Give to Charity Just Like they Pay their Workers...Very Little
UGH, Even the Waltons find a way to screw people when giving to charity: This analysis, by Making Change at Walmart, only includes giving to the private charitable foundations associated with the individuals and families on the list. That means that direct giving without going through the foundation isn't included. But the Waltons aren't giving a lot to their own family foundation—in fact, they're using it to get out of future estate taxes—so it doesn't seem likely that they're secretly giving huge amounts of money to charities directly while not giving to their foundation.

8. Here's Why Protecting Workers Standards and Wages Should be Important to YOU!


8a. Which Industry CEOs are ripping off workers the most?  (Hint it's Fast and it's Food)

10. Workers Deserve to benefit for their Productivity, too

Union Plus Benefits: You're eligible for discounts on cell phone bills, mortgages, gyms and more! Find out here.

Last month, NYC politicians sent a letter to Mrs. Green's Natural Market expressing their concern for their labor practices.  The company was federally charged earlier this year for unlawfully firing 8 workers who supported United Food and Commercial Workers Local 1500.  The workers had no prior records and were combined working at the company for over 50 years.  Workers were on a picket line for over 6 months until the company folded to public pressure settling the charges and rehiring workers with back pay. 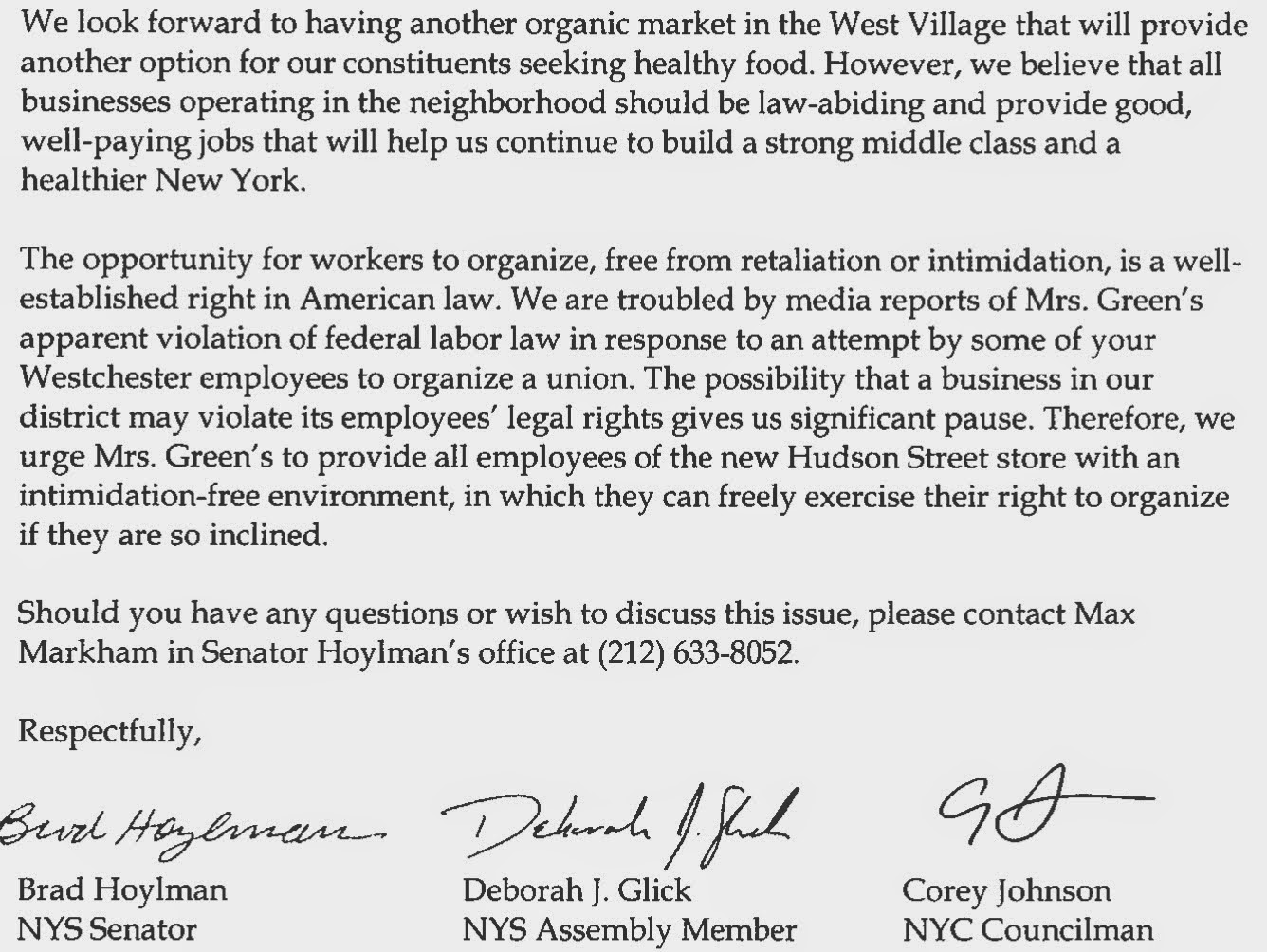 Although the company tried to "spin" the story and say they welcomed the workers back, if it wasn't for the tremendous community support, along with NLRB charges, workers would still be out on the picket line.

Mrs. Green's planned on opening a store in New York's West Village this Spring 2014, but there have been numerous delays.  The store is still not open (September 2014) and New York's West Village politicians want to ensure their new neighbor won't be restricting the rights of their workers like they have in their other stores.   Thanks to NY Senator Brad Hoylman, Assembly Member Deborah Glick and Council Member Corey Johnson,  for sending a letter to the Senior Vice President and Chief Human Resources Office of Mrs. Green’s Natural Market and standing up for retail workers.