Local 1500 Back To School Giveaway

It’s back! Local 1500’s back to school giveaway is officially underway. Qualified participants will get backpacks, notebooks, notepads, pens, pencils, and more! To apply send us an email @backtoschoolgiveaway@ufcw1500.org. The deadline for applicants is September 14th, so apply now while there is still time! #MyUnionHasValue #BacktoSchool #BacktoSchoolGiveaway1500 #UFCW1500 #1u 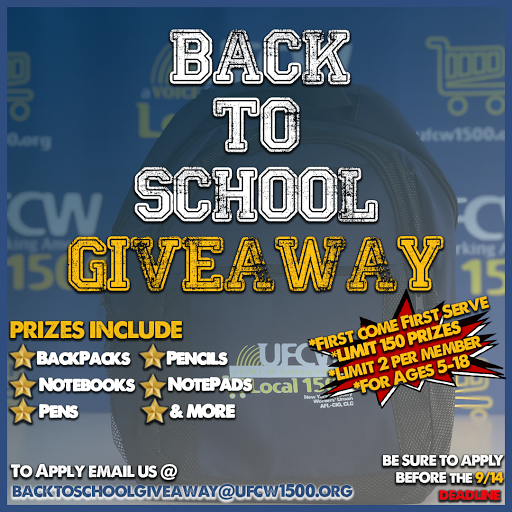 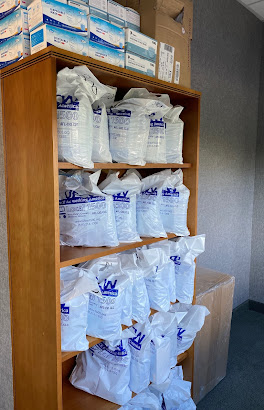 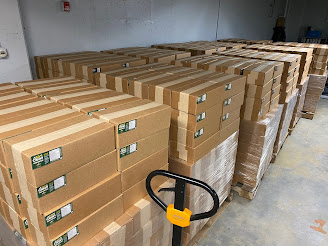 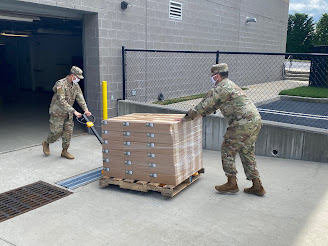 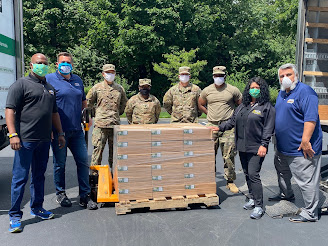 We’re locked and loaded for your PPE needs. If you are in need of PPE send us a direct message.

Coming to your store very soon! 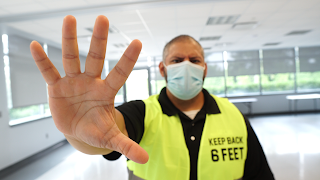 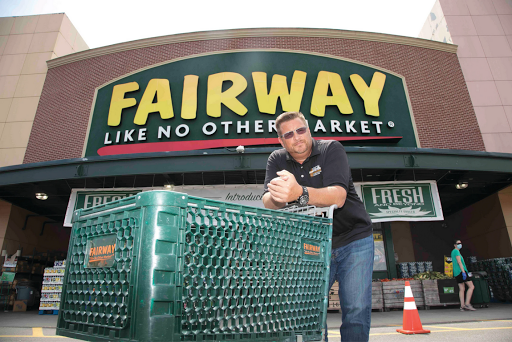 For the past three years, Jamaine Thomas has commuted by train and bus one hour each way from his apartment in the Bronx to his job at the Fairway Market in Harlem. Even through New York's darkest days of the Covid-19 pandemic, Thomas sliced provolone and Boar's Head meats behind the deli counter and made pizzas, salads and sandwiches for the café—all for $16 per hour. That's about $33,000 per year, plus benefits.

But that changed on July 18, when Thomas arrived at work to learn he had lost his job. The supermarket, which served as a mecca for foodies for 25 years, was closing that day. In January the store's owner had filed for bankruptcy, 13 years after being acquired by a private-equity firm, and it was time to make cuts.

While Thomas, a 40-year-old father of a teen and a tween, looks for work before his unemployment runs out, Abel Porter, the chief executive of Fairway Group Holdings is preparing to receive a $325,000 bonus as a reward for managing the bankrupt grocer. Of Fairway's 14 stores, two have closed, two more are slated to close and the rest have been sold. Mr. Porter declined to comment for this article. But Thomas had some choice words for his former employer.

"It comes off like a slap in the face," Thomas said when he heard about Porter's bonus. "We put ourselves in jeopardy during the worst of the pandemic. We were dealing with customers. The corporate people were not. You can't help but feel slighted."

Porter and other Fairway executives who led the company to its second bankruptcy in four years actually were awarded two rounds of bonuses. First they were granted $1.1 million two days before the company filed for Chapter 11 in January as an enticement to remain on the job. Three months later they asked the bankruptcy court for $1 million more in bonuses.

At an April hearing held remotely, Fairway's bankruptcy lawyer, Sunny Singh of Weil, Gotshal & Manges, said that the second round of bonuses was "very important" for enticing management to deliver the best possible outcomes.

"We think that this is justified—more than justified—under the circumstances," Singh said.

Union official Rob Newell listened to the hearing, and his blood started to boil.

As president of Local 1500 of the United Food and Commercial Workers International Union, Newell had seen a parade of bankrupt grocers make the same arguments as Fairway's lawyer. To Fairway executives, their attorneys' and financial advisers' $2 million in bonuses might seem a small sum compared with the company's $66 million in losses last year and more than $200 million in liabilities. But filing for bankruptcy enabled Fairway to walk away from more than $60 million in pension obligations. Unionized grocery workers across the city will have to contribute more of their earnings to fill the gap.

Above all, Newell wondered, why did Fairway executives deserve bonuses when essential workers struggled to keep shelves stocked during the pandemic?

"It's disgusting in the eyes of any worker when a group of people charged with properly running a company fail and then get paid more to stay there," Newell said. "That's disgraceful."

He wasn't the only one upset with Fairway's bankruptcy bonuses. The U.S. Department of Justice also took notice. A trustee monitoring the bankruptcy case argued it was unfair for management to get rewarded when the rank and file didn't. Local 1500 estimates that 50 employees at Fairway stores got Covid-19, and one died.

"The cashiers and the deli managers are not getting bonuses," the Justice Department representative, Greg Zipes, told Judge James Garrity of U.S. Bankruptcy Court at the April hearing. Bonuses "should be applied to all the employees of Fairway."

Garrity agreed Zipes made a "very, very good point." He agreed that the work done by those at the cash registers and loading docks was "heroic" and that "all of the employees deserve merit and certain recognition." Then he approved the bankruptcy bonuses.

"Debtors have demonstrated ample cause," the judge said.

"It's the same thing every time," Newell said later. "It's expected that we will fight the bonuses and the judge will approve. There is no more unfriendly place to a worker than a bankruptcy court."

An epidemic of bonuses

It might seem strange to pay bonuses to executives who have led a company into bankruptcy. Despite efforts by Congress to crack down on the payments, they have been steadily doled out since well before Enron and WorldCom executives stuffed them in their pockets two decades ago. With scores of companies in serious financial distress because of the pandemic, today is the golden age of the bankruptcy bonus.

"There has been an epidemic of these bonuses, just an enormous uptick," said Jared Ellias, a professor at the University of California's Hastings College of Law. "There are reasons for paying them, but they strike a lot of people as wrong."

Large as the numbers are, they actually understate how often bankruptcy bonuses get shelled out. That's because companies increasingly are awarding them just before filing for Chapter 11, because those gifts don't require court approval. Hertz and JC Penney are among the companies that recently paid out bonuses just before bankruptcy. Fairway awarded bonuses both before and after.

"The theory is you don't want a brain drain," said Nancy Rapoport, a professor at the University of Nevada–Las Vegas' Boyd School of Law. "Even though they may have made bad decisions, people who know the business are more likely to help the business."

Rapoport added that bankruptcy bonuses can amount to last-minute cash grabs, especially when desperate companies are unable to come up with a viable plan to get out of Chapter 11 because of the pandemic, e-commerce or plain-old mismanagement.

"If a company has no clear way forward but wants to spend money retaining people, you have to ask why," she said.

Some fans of bankruptcy bonuses argue that restructuring under the auspices of a bankruptcy court is grueling, so executives need to be rewarded for their time. That's the case Neiman Marcus made when it received approval for $10 million in bankruptcy bonuses for its CEO, finance chief, president, the head of subsidiary store Bergdorf Goodman and a handful of others.

Neiman Marcus furloughed nearly 14,000 employees in March. The retailer declined to comment on the bonuses.

Judges commonly accept the argument that the payouts will help focus management on maximizing the struggling company's value, which is the ultimate goal of Chapter 11. Bankruptcy judges typically are drawn from the ranks of bankruptcy lawyers, including Garrity, who used to co-chair the restructuring group at Morgan, Lewis & Bockius. On sensitive matters concerning executive pay, legal advisers invariably defer to another set of advisers: compensation consultants.

"Bankruptcy judges don't have the ability to micromanage compensation decisions," said Robert Gerber, who teaches at Columbia Law School and as a judge oversaw the General Motors bankruptcy. "If the recommendation is reasonable under the circumstances it'd be rare for a judge to disapprove it."

Gerber said bankruptcy bonuses were common when he started working as a lawyer 30 years ago. After the stink caused by Enron-era executives collecting bonus payouts while their enterprises collapsed, Congress passed the Bankruptcy Abuse Prevention and Consumer Protection Act in 2005. The law aimed to rein in "retention bonuses" ladled out to executives at bankrupt companies simply for staying on the job.

In response, ailing companies began awarding retention bonuses before they filed for bankruptcy and began describing bonuses awarded during Chapter 11 proceedings as "incentive bonuses." Incentive bonuses are contingent on hitting performance targets. But experts say the targets are often easy to hit.

For instance, a key condition for Fairway executives to collect their $1 million in incentive bonuses was to sell the flagship Upper West Side store and certain others. But the Justice Department trustee observed that wasn't a difficult target because management struck a sale agreement before filing for bankruptcy.

Other criteria were clear as mud. "It is impossible to determine what, if anything, Incentive Plan participants must achieve in order to obtain a bonus," the trustee wrote.

Fairway responded to the trustee's critique by amending its bonus package and adding information, such as identifying the nine recipients by job title. It disclosed that CEO Porter was eligible to collect 34.7% of the incentive bonus pool, or up to $325,000, on top of what another court document said was approximately $104,000 under Fairway's pre-bankruptcy $1.1 million retention-bonus package.

With the 2005 law meant to clamp down on bankruptcy bonuses essentially a dead letter, it's time for Congress to revisit the issue, said Karen Cordry, bankruptcy counsel at the National Association of Attorneys General.

"It's been 15 years since the last bankruptcy legislation," Cordry said. "We've never gone that long before without reform."

A spokesman for Sen. Charles Grassley, sponsor of the 2005 law, said, "We will look into it."

Rafael Mauleon, store representative for Local 1500, is now trying to find jobs for the Harlem workers at other stores. He said he realizes there won't be enough for everyone.

"People were happy to be there, and it showed," Mauleon said about the Harlem store. "No one thought the store would close. It was a good place. Good customers and good workers."

But Thomas said that although he and his workers knew the store was doomed, they didn't know when it would shut down until they were told on the last day.

"We don't want much," he said. "Just a little job security and maybe some advance notice."

Suzannah Cavanaugh contributed to this article.