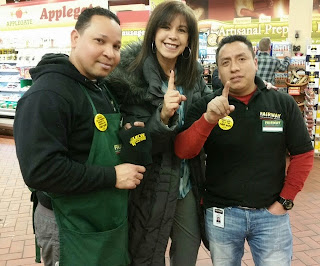 On the day of the vote, the message and tone was clear, “No matter the position, no matter the language, your vote matters. We’re united,” said Iris Bien-Aime, who gathered and spoke to her coworkers about voting at Fairway in Red Hook, Brooklyn.

Fairway Market is truly like no other market, the staff is like an extended family. At the vote in Red Hook, workers who were not on schedule to work came to vote with their children and family. The mood and feel at any Fairway screams solidarity. Which was crucial during the last four months, this was the first contract negotiation with new Fairway's new CEO that took office in September of 2014.

“Our team was dedicated from the start to not only protect our contract, but to set a tone for future negotiations,” said lead union negotiator Rob Newell, “Because of their solidarity and passion, many positive changes were made in the contract. It was a real honor and privilege to work alongside of the committee, their drive and emotion earned all Fairway workers an excellent contract.” 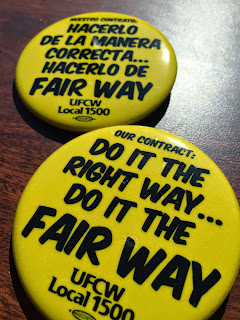 Throughout the four months of negotiations, Fairway members wore solidarity buttons while at work demanding the company negotiate the “Fair Way”. The buttons truly made an impact and helped show support to the negotiating committee.

The contract also includes a number of quality of life issues such as increasing the number of minimum workweek hours for everyone. All members, regardless of class or tenure, are guaranteed to be scheduled a minimum 21 hour workweek.

“The deal gives stability to our families. Especially the medical, pension and legal service benefits, which were all unchanged,” said John Graham, a union negotiating committee member who works at Paramus Fairway.


The term of the Agreement is March 30, 2015 through April 1, 2018. Fairway workers will receive six raises throughout the term, including a retroactive wage increase from March 30th 2015. A minor, but very popular change was switching when vacation time was paid. Vacations are now paid prior to taking vacation, as opposed to receiving the pay the week of vacation. The agreement also includes a successors clause and increases contributions to the Union scholarship fund. Additionally it protects all members of UFCW Local 1500 from any discrimination because of: race, color religion, age, sex, sexual orientation, disability, national origin, genetic information or gender identity or expression. 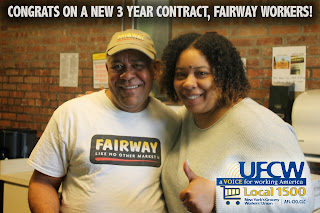 As the vote was closing Jeannette Taylor, who has worked at Fairway for over eight years, walked up to the poll, placed her ballot in the box, and proudly bragged, “I’ve got my union button…I don’t leave home without it.”
Posted by UFCW Local 1500 at 5/22/2015 11:20:00 AM No comments: 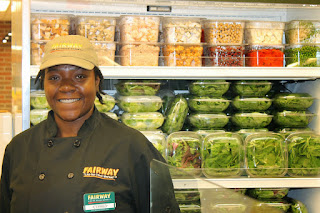 Wegmans is the Wrong Fit for Brooklyn

"Our communities surrounding the Brooklyn Navy Yard are in desperate need of a supermarket, one with a proven track record of providing healthy food, affordable food, and sustainable jobs for New York City. While the public spotlight is on the popularity of Wegmans to its upstate consumers, it's our responsibility to shine a light on the types of jobs they may bring to Brooklyn.

"Our communities need jobs with benefits in order to support and grow our families. Brooklyn deserves jobs which provide guaranteed raises, pay, benefits, and job security. But most importantly in the New York City food retail industry, our community needs a guaranteed set amount of working hours, to make it possible support our families and to balance a schedule between work and family life. Will Wegmans be offering this to the Brooklyn community?

"After all, it's about providing our Brooklyn community members with opportunities for stable and sustainable careers. Simply put, the company has no familiarity or understanding of providing good jobs and healthy food in New York City.

"The Brooklyn Navy Yard needed a responsible employer that our communities and families could count on to build a better Brooklyn. They needed a company that would help Brooklyn families attain the American Dream. What it didn't need was yet another out of town transplant to move into its neighborhood again. Brooklyn deserved better."

NO TO THE TPP

“All across this country, hard-working Americans from every political stripe have sent a message loud and clear—no more trade deals that destroy American jobs and families. The failure of the Senate to advance fast track legislation is not only a stinging defeat for supporters of the Trans-Pacific Partnership (TPP); it makes clear that the American people will not be fooled into supporting another bad trade deal.

“Just a few weeks ago, all of the pundits believed that fast track and the TPP were a lock to pass: they were wrong. Our 1.3 million members, the entire labor movement, progressive Democrats, and conservative Republicans have all stood up and spoke out against this disastrous trade deal. More importantly, this is what is possible when we all stand together and fight for what is right for our families, our jobs, and our nation. While this battle is far from over, we can only hope that President Obama and every TPP supporter hears the voices of the American people and understands that this is a fight they cannot and should not win.”

We are 1.3 million families standing together to build an economy that every hard-working family deserves. 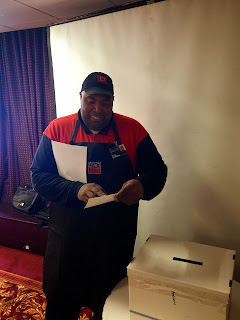 The agreement significantly expanded the amount of part-time workers who receive a guaranteed minimum 20-hour workweek, a key benefit for retail jobs. "This is huge for us," said Terry Quinones, lead union negotiator, "Retail scheduling is usually sporadic, making it difficult to balance a personal life and schedule. Now, even more part-timers can have an ease of mind knowing they have a minimum set number of hours each week. This is going to help hundreds of our families," Quinones said.

The new contract maintains all health and welfare benefits, and protects all members of UFCW Local 1500 from any discrimination because of: race, color religion, age, sex, sexual orientation, disability, national origin, genetic information or gender identity or expression.