Due to the challenges the Affordable Care Act (ACA) has presented during the ongoing discussions, both parties have agreed to extend the term of the existing contract until October 12th, 2013. The Affordable Care Act (ACA) is a new Federal statute signed into law on March 23, 2010 and represents the most significant overhaul of the country's healthcare system since the passage of Medicare and Medicaid in 1965.

President Bruce W. Both released the following statement: "This contract extension accomplishes two objectives. It allows Union and management representatives to continue to meet and negotiate over the legally required changes to our Health and Welfare Plan required under the Affordable Care Act and guarantees that over 10,000 of our members will continue to keep working under the protection of their Union contract."

"This 22,000 page federal healthcare mandate comes with serious cost increases to health care plans and it is the Unions priority to ensure that our members continue to receive the most comprehensive and affordable health care available.

Unlike companies such as Trader Joe's and Walgreens, who are simply sending thousands of low wage workers to new state health care exchanges without understanding the cost implications to their employees, UFCW Local 1500 negotiators are determined to minimize the financial impact of the ACA on our membership and negotiate new collective bargaining agreements that also address important issues such as wages and pensions.  We will not allow the ACA to be used to undermine the excellent Union contracts our members have fought for and earned over many years. We believe this extension will assist us achieve that goal."

United Food and Commercial Workers Union Local 1500 represents grocery workers in New York City, Long Island, Westchester, Putnam and Dutchess Counties. Members of Local 1500 are employed by Pathmark, King Kullen, Stop and Shop, Gristedes, Fairway, D'Agastinos, Key Food and Shop Rite.
Stay up to date on all news from UFCW Local 1500 on twitter @ufcw1500 and on facebook.com/ufcw1500 and at www.ufcw1500.org.

Walter's Corner: This Can't Be Right...What Happened to Labor Day 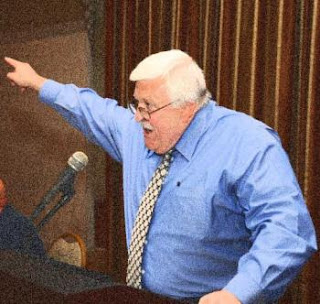 
Can this be right? 4 out of 5 American adults need some kind of government help!  This is just wrong! This great country has no jobs where hard working people can make a living and raise their families on.  I'd like to know why there are no full-time jobs for blue collar workers in our country.  Why there are no manufacturing jobs and no full-time retail jobs.  Everything has been outsourced (including produce) so companies like Walmart can get the goods they sell for close to nothing by using the world's cheapest labor.

But earlier this month Walmart's CEO, Bill Simon, hosts a summit.  In a push to create US manufacturing jobs he organized a two day conference that drew almost 1,500 government officials and business leaders to discuss the importance of increasing manufacturing jobs in the U.S..  This is great, right?! Well, Republican governors at the event said that survival of the US manufacturing industry hinged on keeping labor costs low.  They also suggested speeding up the permitting process and offering special tax breaks and incentives as ways of encouraging companies to relocate to the US.

It's the same old story: Help the companies and *** the workers .  There was a time when manufacturing jobs were full-time union jobs.  Workers were paid a fair wage with benefits.

Bill Simon said at his event in Orlando, Florida, "We can't become solely a service economy.  We need to make things in America." Really?!?  Is Walmart the company that built factories in China and other third world countries to find the cheapest labor? I believe so!  This will be great, companies will be opening factories paying minimum wage and no benefits...This will definitely make things right for workers in our country.

What's happened?  We import steel from China when we need a bridge built. Why? There was a time when the world purchased steel from the US, made in a city called Pittsburgh.  There was a time when this country worked! Everything was made here.  Detroit built cars and sold them here.  Factories all across this country made everything: clothes, suits, tvs, appliances and furniture.  Blue collar union jobs made the middle class.  Those jobs could support a family.

No matter what your job is, how do you evaluate working hard?  Does the CEO of a company, doctor, lawyer, congressman, senator news anchor, sports athlete, work hard?  Yes.  Are they paid well? Yes.  Not everyone is qualified for the above jobs, but men and women who have blue collar, retail and service jobs work hard every day as well.  Do they deserve fair pay?  Yes.

During the Regan administration the rich became richer and the poor became poorer.  During the Bush administration there were tax breaks for the rich.  There were two wars not paid for and not necessary. Weapons of mass destruction were never found.  Bush's friends got rich, Chenney's friends got richer.  Questions loomed if Bush was really elected, and the electoral process in Florida was heavily scrutinized.  I asked after the election if our government really worked.  The majority of voters elected a president based on what he promised, stands for and the change he wants to make to improve our nation.

Congress, the Senate and the White House fail the majority who elected the president because of party politics.  It doesn't matter what's good for the country or the majority, political parties cannot agree and cannot progress our nation.  The only thing that seems to matter is what's good for lobbyists and what cost you're willing to pay.  This week in our nation's capital, DC, this theory was sadly once again proved true.  The Mayor of DC (Grey, Democrat) vetoed legislation that would require large, wealthy employers to pay their employees a minimum wage of no less than $12.50 an hour in combined wages and benefits.  Subsequently raising full-time employee salaries from $17,000 to $26,000 at stores like Walmart.

Politics divide our country.  Once we stop voting and acting on political party lines, and start acting for the benefit of the majority of our struggling country, then, maybe we'll have real progress.


We're pleased to announce Local 1500 members have of overwhelmingly endorsed Bill de Blasio for Mayor of NYC.  The decision was announced tonight at our General Membership Meeting.   We couldn't be more excited to paint the NYC streets with UFCW Gold to get out the vote for Bill de Blasio in the coming weeks! 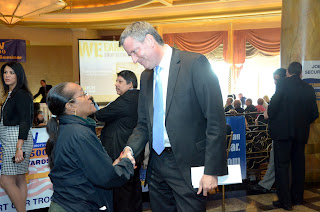 United Food and Commercial Workers Union Local 1500 (UFCW), representing over 23,000 grocery workers, today announced its endorsement of Public Advocate Bill de Blasio to be the next Mayor of New York City. The Union cited de Blasio's commitment to helping working families and addressing the crisis of income inequality that is leaving a majority of New Yorkers behind.


"Over the last few months, Bill de Blasio has articulated a progressive vision for New York City that the members of our Union fully support," said Bruce W. Both, President of UFCW Local 1500. "Over the years Bill has always been there to support our members as they have fought to improve their wages, benefits and quality of life. He understands that when responsible employers can operate in a free and fair market our City's economy thrives. Bill de Blasio recognizes the negative impact companies like Walmart can have on our communities with their low wage, no benefit, predatory pricing policies. Bill de Blasio will make sure that those living on Main Street are not left behind at the expense of those prospering on Wall Street," Both concluded.

UFCW Local 1500 represents 23,000 members and promotes progressive policies such as demanding Wal-Mart be held accountable for it's unethical business practices, supporting the expansion of supermarkets into under served communities and creating good food, good jobs and good health for all New Yorkers.

Other issues of importance to Local 1500 members include aggressive wage theft prosecution and demanding labor standards be attached to corporate subsidies. UFCW Local 1500 also has an active "Women's Network Program," which addresses issues particular to women such as domestic violence and breast cancer. Over half of UFCW Local 1500's members are women.

Get out the Vote Today! 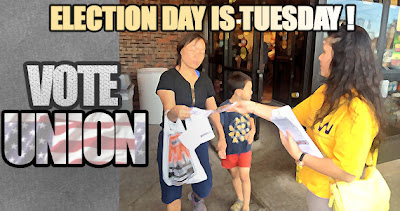 It's Election Day today.  Get out and vote!

If you'd like to volunteer at a campaign office in New York today call Adam Obernauer at 5162141341 or email info@ufcw1500.org!
Have a great election day, and make your voice heard as we re-shape New York! 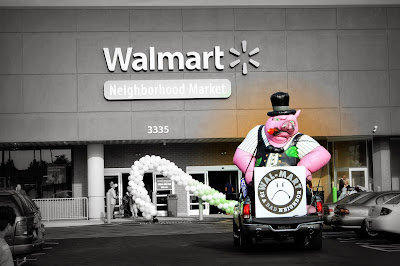 As calls to rebuild the economy with better jobs reverberate across the country, Walmart workers and their supporters announced the largest mobilization since Black Friday, set for Thursday, September 5.

The announcement comes as Walmart has failed to meet a Labor Day deadline to reinstate illegally fired and disciplined workers and publicly commit to improve wages and jobs. Thousands of workers and their supporters plan to protest on Thursday in over a dozen cities across the country.

Since June, Walmart has illegally disciplined nearly 80 workers, including fi ring 20 worker-leaders. More than 100 Unfair Labor Practice charges have been fi led with the NLRB against Walmart.

“Walmart, we cannot wait any longer for you to do the right thing for American workers. Our jobs should not be at risk when we speak out about improvements that would help our families and Walmart customers,” said a Cindy Murray a Walmart worker who was recently arrested for protesting at Walmart’s Washington, D.C. offices.


“Walmart cannot silence our concerns,” said Brandon Garrett a former Walmart worker who was illegally fi red after going to Walmart’s annual shareholders meeting. “Our fight to get Walmart to publicly commit to providing better jobs is not just about improving the lives of our families. It’s about improving jobs for all American workers and for strengthening the economy for all of us.”

There are several ways to help support Walmart workers as they take action on September 5.

• Spread the word on social media: Share any of the images located at http://bit.ly/17zqsEN or the video posted at http://bit.ly/19fR8K0 on Facebook.   Go to Twitter to show their support. Sample Tweet: #WalmartStrikers are drawing a line. Stand with them for a real wage & workers’ rights on Sept. 5th bit.ly/1cgXnPA @ChangeWalmart

• Actions: OUR Walmart is having actions on the ground across the country. All of those events are posted at the Action Network website at http://bit.ly/12IMmni.