Supporting Families in Need This Thanksgiving

Doesn't Walmart Have Enough to be Thankful For?


A lot has been happening in the world of Walmart leading up to this Thanksgiving, and for the corporate giants, it ain’t looking good.   While Walmart CEO Mike Duke has announced that he’s stepping down, waves of strikes leading up to Black Friday have been the strongest yet.  In this past month alone, workers went on strike in Miami, Brooklyn Center, Tampa, Sacramento, Dallas, Chicago, Seattle, Los Angeles, and cities throughout Ohio. Walmart has been feeling the pressure and in an effort to correct the company’s image, has tried to show the world that their employees are not telling the truth. They are the good guys that “care” about the community.

In a failed effort to show how much they “care,” Walmart planned a Thanksgiving food drive for their own employees.  The food drive came from the Canton, Ohio based Walmart and the irony became a media sensation. The story hit everywhere from the New York Times' comic strip mocking the company, to Stephen Colbert’s comedy skit, to high profile actors like Ashton Kutcher getting into media battles with the company.

So what does Walmart need to do to try to create the illusion that it’s trying to help the community? This Thanksgiving, Walmart is set to donate over $1 million to food banks and local charities across New York State alone. With these recent efforts, Walmart is in line to be the most darkly ironic business in the world.  Instead of raising the pay and benefits of their own workforce that can’t afford to buy food on Thanksgiving, they’re more willing to throw large sums of money to Anti-Hunger groups in the name of “charity”. 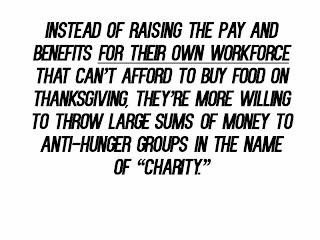 Walmart has long established itself as the "worst of the worst" and is the epitome of corporate greed.  From the sweatshops overseas, the fires in the Bangladesh factory killing thousands, to the bribery of the Mexican government, and the thousands of workers going out on strike demanding better pay, it leaves us to think, when is enough, enough? When will Walmart be held accountable for the destruction of local communities and the devastation in factories throughout the world? When will the irony be strong enough so people no longer accept Walmart’s donations and pathetic attempts at being an accepted and respected business?

We think that the time should have come long ago and hope that this Thanksgiving, people give thanks to the workers in these stores that have to suffer day in and day out to continue to make the Walden’s the richest family in the world. 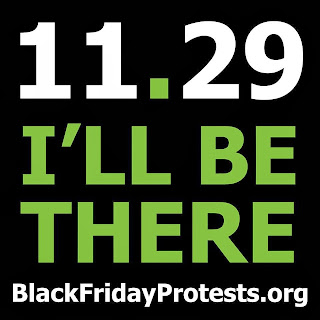 
Get up to date on the latest info from negotiations with Stop & Shop.

With Thanksgiving approaching, we need to come together and discuss Stop & Shop's greedy demands in their contract proposals, and our next actions.

Please attend and spread the word to your coworkers about this emergency meeting.

A Stop & Shop bagger from Mass. has won a grocery bagging competition, will head to Vegas for the National Championship and $10,000.

Trader Joe's pre-packed salads are linked to an E-Coli outbreak in 4 states.

Ahold, Stop & Shop's parent company, just sold a chain of stores in Europe for over $210 million.

You can now apply online for a UFCW Local 1500 scholarship.

A group of Managers from Tops Market (upstate NY) has bought out the company.

UFCW Region 1 Director, Rich Whalen, and Federal Mediator, Carlos Tate, were present during our negotiations yesterday.  Some progress was made by both sides through the negotiation session.
Please remember that the obligation of your negotiating committee is to examine all available options during negotiations before making any final recommendations to the membership to vote on.

This obligation becomes even more significant when the committee is debating a recommendation that could result in a work action.  The longer we work without a contract (or an extension) the more likely it is that you will see contingency plans from both sides become public.

Your union leadership and staff have been preparing for some time to be ready for any ultimate decision that we may face, we expect that Stop & Shop has been doing the same thing.

Please continue to go to work every day, and keep your Union Representative informed of anything unusual at your store.  If you have any questions or concerns please contact us by replying to this message or contacting your Union Rep.

Next scheduled contract negotiating session is 11/22.

Continue to check our Facebook and Twitter, and Contract page for most up to date info or actions, and to engage in negotiations conversations on our Facebook Page.

Following is for release by UFCW Local 1500

The United Food and Commercial Workers Union Local 1500 (UFCW), New York State's largest grocery workers Union, has requested that the Federal government appoint a mediator to intervene in labor negotiations with Stop and Shop Supermarket. The UFCW is taking this action in an attempt avert a Union strike or company lockout that could affect over 5,500 employees. Local 1500 members employed by Stop and Shop are currently working without a contract due to the company's refusal to sign a two week Union contract extension.

"Stop and Shop Supermarkets' refusal to sign the two week contract extension offered by the Union leaves consumers, workers and dozens of communities throughout the area holding their breath waiting to see if Stop and Shop will lock out its employees," said Anthony Speelman, Secretary-Treasurer of UFCW Local 1500 and lead negotiator for the Union's Stop and Shop Negotiating Committee. "The Union is taking the responsible step of asking for a Federal Mediator to enter the negotiations in hopes of avoiding what would be an economically devastating work stoppage. The Union is also publicly committing to consumers that it will not call for a strike until a Federal Mediator has had an opportunity to help the parties reach an agreement. Stop and Shop must now step up and take the necessary responsible steps to resolve this dispute," Speelman concluded.

The potential work stoppage by the workers is due to Stop and Shop management's attempt to drastically reduce their employee healthcare benefits and, for some workers, eliminate them completely.
"My Union and its 23,000 members want to thank the public for their overwhelming support for the Stop and Shop employees" said Greg Pasquale, Produce Manager for the Stop and Shop located in Beekman, NY. "We are grateful to our loyal customers, the local politicians, members of the community and the other Unions that have pledged to honor our picket lines if Stop and Shop locks us out or forces a strike. We want everyone to know that the last thing we want to do is inconvenience shoppers, lose pay or create economic hardship for our communities. Sadly, it does not appear Stop and Shop management shares our concerns," Pasquale concluded.

A ground swell of public support for over 5,500 unionized Stop and Shop employees seeking a new labor contract was "callously" disregarded by management as the company refused to sign a Union offer of a two week contract extension. The Union, United Food and Commercial Workers Union Local 1500 (UFCW), in deference to shoppers and their communities, has agreed to temporarily allow workers to report to work while the Union continues to try to reach an acceptable agreement and avoid a strike that can legally take place anytime after midnight November 3rd.
Local 1500 was given the authority to call a strike by Stop and Shop employees on October 28th in response to their employers attempts to drastically reduce their employee healthcare benefits and, for some workers, eliminate them completely. The strike authorization remains in effect until an acceptable agreement is reached.
Effected Stop and Shop employees are employed by Stop and Shop Supermarkets operating in Long Island, the five boroughs, Westchester, Putnam and Dutchess Counties.
"The overwhelming response from the public in support of the Stop and Shop employees has failed to encourage the company to sign the two week contract extension offered by the Union," said Anthony Speelman, Secretary-Treasurer of UFCW Local 1500 and lead negotiator for the Unions Stop and Shop Negotiating Committee. "The workers have received unprecedented backing from consumers, politicians, community groups and labor organizations. These same people are being callously ignored by Stop and Shop management who are clearly prioritizing their greed over their employees and customers needs," Speelman continued.
"Despite Stop and Shops disregard for their loyal workers and shoppers, the Union will not immediately commence a strike and will remain at the bargaining table," Speelman stated. "However, it takes two parties to make a deal and Stop and Shop's approach to these negotiations has been one-sided and obstinate. If they do not change their approach, a strike is inevitable, " Speelman concluded.
"Stop and Shop management fails to understand that shoppers who come to our stores are not just customers but are also friends and neighbors," said Greg Pasquale, Produce Manager for Stop and Shop in Beekman, New York and a member of the Unions Negotiating Committee. "My co-workers and I do not want to inconvenience shoppers, lose pay or create economic hardship for our communities. However, management must come back to the table with a new attitude and partner with us to reach a fair agreement to avoid a strike," Pasquale concluded.
The Union has launched a massive public information campaign that includes press outreach, social media and labor to neighbor organizing. They are also engaging elected officials via meetings, phone calls and emails.
United Food and Commercial Workers Union Local 1500, based out of Westbury, New York represents grocery workers in New York City, Long Island, Westchester, Putnam and Dutchess Counties. Members of Local 1500 are employed by A&P/Pathmark, Fairway, Stop and Shop, Gristedes, D'Agastinos, Key Food, Shop Rite and King Kullen. Stay up to date with UFCW Local 1500 on twitter @ufcw1500, facebook.com/ufcw1500,www.ufcw1500.org.