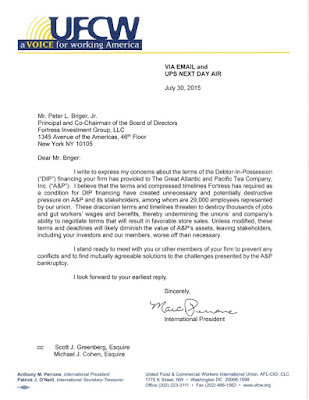 Our International President, Marc Perrone, has sent a letter to the Fortress Board of Directors in response to the terms and timelines required for Debtor-In-Possession financing for A&P.

Click the image to enlarge and read the letter.

Our International President and all UFCW Locals are standing together in solidarity to fight back.

Why We're So Motivated to Kick Cancer's Butt This Year 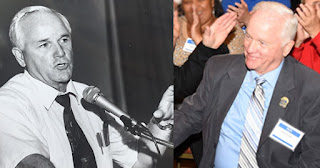 At our union, we fund raise for causes each year. But 2015's Light the Night Walk is standing out. We're walking an raising funds in honor of our former beloved President, Frank Meehan, who passed earlier this year to cancer.

Anyone who knew Frank can attest, he was simply one of a kind.  His generosity, loving spirit, and out right respect for all he met, were just a few of his many traits. 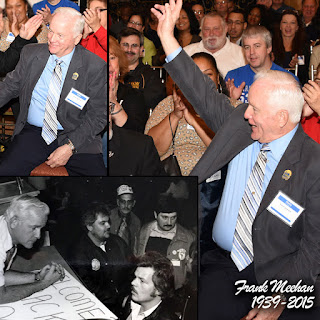 This entire summer we're hosting a ton of events to raise money for the Leukemia Lymphoma Society, but you can help individually.  It's easy, join our Light the Night team here and start fundraising online or at your store.   Or you can donate to our team, UFCW Cancer Kickers, right here.

If you have any questions on fundraising techniques or ideas, please, don't hesitate to reach out to me. As a cancer survivor myself, this cause is so close to my heart. Join us as we come together to help the millions affected by this disease each day.

Thanks again, and like I said, don't hesitate to reach out.

“For years, the hard-working men and women of A&P not only did their jobs, they personally and financially sacrificed to invest in A&P’s success. These sacrifices were made for the sake of their families, their co-workers, and the customers and communities that they deeply care about. Now, at this critical time, after repeated mismanagement and strategic mistakes made by company executives, A&P is asking for even more. Enough is enough!

“Instead of asking for more sacrifices to pay-off a select group of executives and corporate investors, A&P should be focusing on their workers and their families during this challenging time.

“We want to be very clear, our members and their families sacrificed. They invested financially and personally in the success of these stores and they remain committed to working hard to make these stores a success for any responsible buyers. But make no mistake, we will not take part in any effort that asks them to give up what they have earned and deserve.

“Looking ahead, we will work cooperatively and constructively with anyone, but we will fight back with everything we have if A&P or its financial backers attempt to further exploit our members. For A&P to ask our members to give up their rights and benefits is simply unacceptable. Moreover, it is an insult given that it is our hard-working members who have and will make these stores a success. In fact, what will make these stores a true financial success is new and responsible management, not more sacrifices by A&P’s hard-working men and women.

“If A&P, its executive team, or its investors want to play the blame game, they should all look in the mirror.

“Now is the time for A&P to do what is right and we fully expect that they will honor their responsibilities to its employees, our members, and their families.”

We are 1.3 million families standing together to build an economy that every hard-working family deserves. 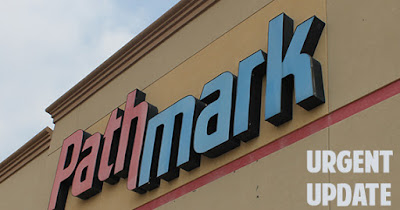 For years, you, your co-workers, and your families have personally and financially sacrificed to invest in A&P’s success.

You made these sacrifices for the sake of your families, their co-workers, and the communities you so deeply care about. In light of all that you have done, we know how angry you are about what the company has done. It is an outrageous failure.

You did everything right, and it’s because of their repeated mismanagement and strategic mistakes that A&P is where it is.

Now, we want you to know, in the interests of selling more stores, A&P is asking for even more sacrifices from you and every co-worker.

Among the bogus proposals they have made:

Our message to the company is this…

We will not sacrifice more to pay-off a select group of executives and corporate investors. Period.
As we have told the company, our members and their families have already sacrificed.

The truth is what will make your store a financial success are not more sacrifices by you or A&P’s hard-working men and women – you have already done that. What will make them a success is new and responsible management.

If A&P, its executive team, or its investors want to play the blame game, they should all look in the mirror.

We will fight as hard as we can to protect what you have earned and deserve, and will do everything in our power to make A&P honor their responsibilities to every members and their families.

Our Union is prepared to answer any of your questions and will continue to keep you informed through our Shop Stewards, visits by our Union Delegates, our website, social networks or your phone calls.  Above all, keep the faith and remember we’re fighting every second to protect your future, your jobs and our union.

Statement from President Bruce W. Both

All of our brothers and sisters from A&P/Pathmark and related banners are enduring a most difficult situation. Be assured our union is fighting every minute to protect you and keep you informed with the most accurate information. All Local Unions, with the assistance of our International and the input of Bankruptcy Attorneys, will not rest until we help bring a positive resolution to this terrible situation.

Our first concern is to stop the spreading of inaccurate information. As usual, rumors are spreading like wildfires throughout the stores since the filing of the 2nd Bankruptcy. The rumors, as usual, are even more distressing and untrue. Do not empower them. By following this link you’ll find a chart of the present status of each Pathmark store our union represents. Please remember this is only an initial report as of today, and we expect additional bids on the unsold stores and those slated to close (refer to attachment).

14 of our stores have been announced as sold during this first round of ‘bidding’, and two were announced to be closing. We have every reason to believe there will be more stores sold. I must stress though, that due to A&P's second bankruptcy filing, we are again in the hands of the Bankruptcy Court, and the judge could modify our agreement if petitioned to do so by the Company.

Our Union is prepared to answer any of your questions and will continue to keep you informed through our Shop Stewards, visits by our Union Delegates, our website, social networks or your phone calls.  Above all, keep the faith and remember we’re fighting every second to protect your future, your jobs and our union.

You can find all updates on Pathmark on our update page located here.

The following statement is from the 13 UFCW Local Unions Representing A&P/Pathmark, The UFCW International, and Bankruptcy Professionals: 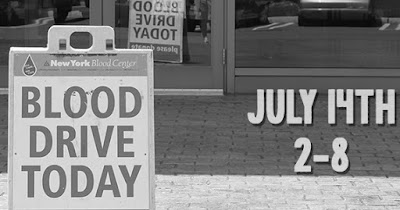 The New York Blood Center is looking for our assistance.  They're in urgent need of blood.

Come on down to our Union Hall any time after 1:30 PM, enjoy refreshments, a Summer BBQ, and to give the gift of life by donating blood.  All donors and volunteers will receive a T-shirt and gift!

Additionally, all of our benefit offices, Legal, Medical, Pension, as well as The Long Island Council (Drug and Substance Abuse) will be open and available until 8:00 PM.

Thanks and looking forward to seeing you Tuesday!  RSVP is necessary!