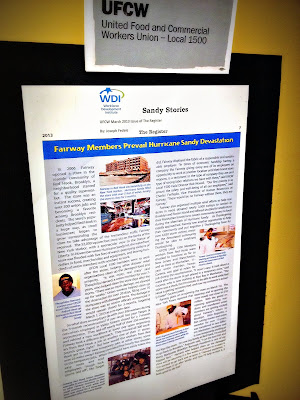 Like all of us, UFCW Local 1500 Members working at Fairway in Red Hook were severely impacted during Super Storm Sandy....They (and Fairway) are now being recognized for helping rebuild their community after the super storm hit New York.

The AFL-CIO has opened an exhibit recognizing and documenting the work of organized labor during and after Super Storm Sandy.  Photographs of workers and volunteers during the storm are posted along with reconstruction efforts.  Among the photos throughout the exhibit, photos of Red Hook Fairway workers and a story featured in our March edition of The Register, are up for display.

UFCW Local 1500 members working at Fairway in Red Hook helped clean up the ravaged store, then helped re-open the Brooklyn cornerstone store after a three-month closure due to severe damage.  Throughout the three-month closure at their Red Hook store, Fairway kept all their workers employed at other Fairway locations throughout the tri-state area, offering a free shuttle service for local workers.

You can check out the amazing exhibit here:

Sandy Stories exhibit will be open until June 30, 2013 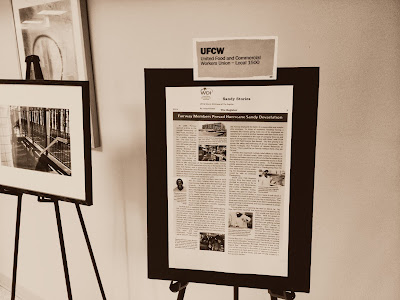 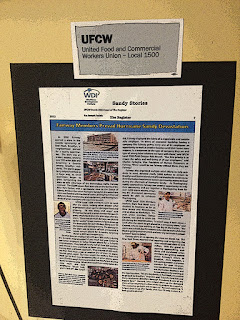 Amish Market's Owner is Heading to Jail Because of Brave Workers

Adem Arici is heading to jail and the brave workers from his six-store chain are finally rejoicing that justice has been served.  In 2009 UFCW Local 1500 helped workers at The Amish Market re-collect over $1.5 million in stoel wages.  The NY Department of Labor's wage theft investigation found Arici and his business partners were failing to pay their employees correct wages and not paying employees overtime.

Shortly after, federal prosecutors began examining Arici's entire business, including tax records for the six-store chain.  It was found that Arici and his business partners were not only stealing wages from their employees, but they were fudging the books in NYC for years, withholding over $50 million in taxes.


As workers, we all know how real wage theft is.  Although it may not get as much public attention as it should, it's occurring every day in throughout our country.   Many businesses today have an inherent belief that basic labor laws do not apply to them.  Whether it's stealing wages, or closing stores to avoid unionization, the trend to "save a buck" by violating workers rights continues to grow with little resistance.  Though on a day like today when a corrupt Adem Arici is sentenced to jail for fixing his books and not paying taxes, it should be noted that the light was shined on his dark & dirty business by a small band of union Organizers and a group of brave workers standing up against injustice.  Without the tremendous courage from the workers at Amish Market, who fought back against their boss stealing wages, Adem Arici may not have been sentenced to jail for evading taxes.

As prevalent as wage theft is, NY Republicans STILL want to repeal the Wage Theft Prevention Act.  Why? So businesses can continue to profit from cheating their workers out of money they are owed.  This isn't a partisan political issue,  it's a people issue.  If you believe workers should be paid the amount agreed upon when hired, simple as that you agree with the Act.  End of story.

NYS Attorney General, Eric Schneiderman, said it best on wage theft, "An employer who knowingly violates labor laws is not an upstanding businessman saving a few bucks.  In the end, he is hardly any different from the pickpocket, and the law should treat him as such."  The pickpocket is heading to jail, and New York has the proud, brave, and courageous gourmet grocery workers to thank.