Image via WikipediaSN: A&P here on Friday said it has named board member Frederic F. "Jake" Brace to the newly created position of chief administrative officer, the third high-level hire at the troubled company in the past week.

The AP has more

UFCW Local 24 has ratified an agreement with Kroger.

AFL-CIO Blog: Public to Lawmakers: End Tax-Cuts for the Rich!

Two Minnesota-based sister locals of the United Food and Commercial Workers have voted to approve a merger.  [Supermarket News]

More on the NYC DCA Supermarket Sweep: About half of all supermarkets (52%) in the five boroughs of New York City were found to be violating pricing regulations, the Department of Consumer Affairs here said. [Supermarket News]

Mayor Bloomberg is considering a ban on smoking in NYC Parks and Beaches.

Poughkeepsie Journal: A&P Sues Stop & Shop
A&P's parent company, Great Atlantic & Pacific Tea Co. Inc., is flinging charges that Stop & Shop lies to consumers about having lower prices than A&P. "Stop & Shop is presently engaged in an advertising campaign, involving various of its stores … in which Stop & Shop falsely claims that customers can 'save more every time you shop' at Stop & Shop," lawyers for A&P wrote in the lawsuit filed Friday in U.S. District Court here

A difficult situation for Stop and Shop as they opted out of a project in Massachusetts:
"The town received a letter from them on July 26," Town Planner Kathy Joubert said yesterday. "It does not say why - it simply states they're no longer pursuing building a store at the 77 Main St. address."
The announcement comes as an abrupt end to a five-year drama that saw Stop & Shop go to state Land Court to fight a 2006 Planning Board decision to deny the company's site plan proposal.


AFL-CIO Blog: Glen Beck to the Unemployed: Go Get a Job at McDonalds!

WNYC on The NYC Department of Consumer Affiars 'Supermarket Sweep'

NY1: Protest at Chelsea Trader Joe's
Protesters gathered in front of the new Trader Joe's in Chelsea on Thursday to call attention to the plight of farm workers. They said shoppers should know about the ongoing human rights abuses against farm workers, who they say pick tomatoes sold at the company's stores.

To juice sales, Target is hoping fresh eats and a 5% discount for store credit-card holders will do the trick.
Despite reporting Wednesday that quarterly profits rose a whopping 14% in the previous quarter, the nation's second-biggest discount retailer said sales came in "softer than expected." [Daily News]

And two UFCW Local's are set to merge in the mid-west.“Growing our union, negotiating good contracts and helping workers form and join a union will be the priorities of the new organization,”

They have now appointed Paul Hertz to the role of Executive Vice President, Operations.

Star-Ledger: At least 8 Pathmark's to close in New Jersey


NYC Department of Consumer Affairs: One out of Two Supermarkets Fail Inspections
The city's Department of Consumer Affairs says one out of two food stores it inspected in the city was overcharging its customers.  According to the DCA Commissioner Jonathan Mintz, the agency checked out 983 supermarkets across the five boroughs over the past year to see if mistakes were made at the cash register.

"The results of our inspection were very troubling," Mintz said. "We're very unhappy with what we're seeing out there"
Here is the DCA Press Release.
More @ [NY Times] [NY Post] [NY1 with video]


A&P Announces Closure of 25 Stores
The stores that are closing are located in New York, Maryland, New Jersey, Pennsylvania and Connecticut and will affect 2,000 staff.


Woodbridge A&P on Rout 35 Closing in October
Woodbridge, NJ-- The A&P store on Route 35 is among the 25 stores being closed this fall by the owner of the A&P and Pathmark chains.


Walmart Says Employees Chose to Remain in Store During Flood
Authorities had warned managers of the impending flood the night before-- but now Walmart says it was the employees' choice to stay. Nobody was asked to stay or forced to stay at any point in time.


Daily Mail: Union Strikes West Virginia Ballistics Laboratory
Rocketcenter, W.VA-- About 700 workers have walked off the job at a Mineral County plant after contract negotiations with Alliant Techsystems failed to reach an agreement.


Remodeled Target Opens Including Grocery Store In Donelson, TN
The Target store is scheduled to reopen August 19. The store, branded by the company as PFresh, will add fresh produce, meat and baked goods.

Image via WikipediaThe stock of Delhaize Group fell more than 11% on Friday after the company reported weak U.S. sales at its Food Lion division in the second quarter.

A&P on Friday said it would close 25 stores as it begins the implementation of its newly announced turnaround plan.A&P officials declined to provide a list of stores slated for closure, although a spokeswoman told SN Friday the closures “include those across our A&P, Waldbaum’s, Pathmark, Super Fresh and Super Foodmart banners.”

New York Times: The Laborers’ International Union has agreed to rejoin the A.F.L.-C.I.O., increasing hopes for the once-splintered labor movement to reunite under a single umbrella

The "Food Basics" brand is now available in the aisles of Pathmark stores. “This economy has definitely affected our customers’ shopping budgets. The new Food Basics and Home Basics brands will allow our shoppers to buy all their household necessities for much less than national brands,” Sam Martin, chief executive officer of A&P, said in a statement Thursday.  [Press Release]

Crain's NY Business: Ron Burkle and Barnes & Noble:
Barnes & Noble said Thursday it has not reached a settlement with financier Ron Burkle's Yucaipa Cos. after news reports the companies were close to a deal. Mr. Burkle, who owns a 19% stake in the bookseller, is suing the company in an effort to expand his stake without triggering a poison pill plan.
Trader Joe's is rumored to be coming to Staten Island, the Staten Island Advance wonders if this is a welcomed or unwanted addition to the community..
Fresh Direct, a Re-Invention after Crisis...[NY Times] Surviving a major crisis — an immigration audit that decimated the company’s work force — at a time when the company was hemorrhaging money and alienating customers because its basic business model was not working...
NY Times: State Officials Skeptical of Willets Point Project
And guess what New Yorkers, you'll be voting on Term Limits again this November. 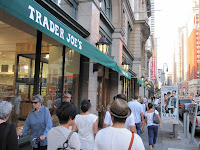 The Coalition of Immokalee Workers is protesting to end abuse against farmworkers who pick tomatoes sold to the Trader Joe's chain.

Check out WNYLabor's video on Mott's.

Wal-Mart has quietly been raising prices. [The Daily Finance]

N.Y. State Senate rejected the Farm Workers Bill: The measure would require farmers to pay workers time-and-a-half wages and provide 24 consecutive hours of rest each week. Collective-bargaining rights would also be extended to employees who work on farms that record more than $650,000 in gross income over a year.

Steven Jenkins, cheese impresario and senior manager of Fairway Market in New York City has written an Op-Ed in The Gourmet Retailer.

Missed the UFCW's Panel on Immigration Reform? You can watch it here.

Our UFCW brother Brian Petronella, the longtime president of the Westport-based UFCW, Local 371 and a leading figure in Connecticut labor and politics died suddenly Friday night. For more information please head to www.ufcw371.org.  This is a tragic loss for the UFCW, and Brian will be missed dearly.

Last week, the U.S. Senate passed a funding measure that includes a six-month extension of the enhanced federal funding level for state Medicaid programs. The measure passed last Thursday by a vote of 61-39.  More @ Supermarket News.

The FTC has ordered Tops to sell seven of their newly acquired Penn Traffic stores.

Action Alert: Tell Mott's: Get the scabs out of your apple sauce!

In related news Forbes reported last week that Barnes & Noble may be up for sale;
Billionaire Ron Burkle, who increased his ownership stake in Barnes & Noble last year to about 18 percent, has been battling with Riggio over changes he wants to see made to corporate governance in order to boost value. Burkle has said he isn't interested in a takeover but expects to propose a slate of three new directors at the next annual meeting, scheduled to be held by Sept. 30. Barnes & Noble officials have been concerned about an alliance between Burkle and Aletheia Research & Management Inc.,

Please join Wake Up Walmart and the National Labor Committee in calling on Walmart to support a 35 cent per hour minimum wage for garment workers in Bangladesh.

WSJ: Changes in Flushing Set Off Food Fight:
The recent closure of a Key Food in Flushing was the last straw for many longtime residents, who say they feel ignored and isolated. Now, they are asking the new Asian market in the area to cater to them, too.

Gristedes in Pelham Manor to Close: The Pelham Weekly reports that the store will close as soon as possible and even though Grocer John's is closing, Gristedes presence in Pelham Manor may not have come to an official end:“We were trying different experiments in hope of coming up with the correct formula,” said Mr. Catsimatidis. “And we may try and give it one more shot.”

B-Net: Target Focuses on Food, Not Fashion in East Harlem.

The new King Kullen in Island Park is moving forward...

Target Boycott Goes Way Beyond Minnesota
Tens of thousands of people send emails to the company urging them to rescind the donation of $150,000 to Tom Emmer, an anti-gay GOP politician in Minnesota.

BNet: East Harlem Target Launches With a Food Focus
The Target will offer a selection of produce and fresh meat that's limited but still extensive enough for customers to shop the location as a basic grocery store.


A&P Launches Rx Reminder Program
A&P Has launched two new services that allow customers to manage their prescriptions, and also can notify them when the prescriptions are ready to be picked up.


Times Union: BPA Toxic Law Signed
New York becomes the seventh state to phase out children's products with the chemical BPA. BPA is detected in 93% of Americans, with younger children having higher levels than adults.


Walmart Knows Where Your Jeans Are
Walmart began placing removable radio-frequency ID (RFID) tags on jeans and underwear. The retailer claims this will help with inventory and preventing theft, but the move has privacy advocates worried.


PR Newsletter: Stop & Shop Reduces Its Carbon Footprint
Stop & Shop announced that it has completed the installation of solar panels on eight of its stores. The panels will reduce the amount of energy consumed by the stores by more than 7%. 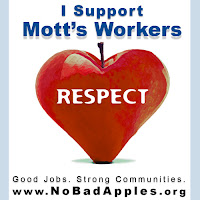 
SF Examiner: Foxwoods Beverage Servers Vote in Favor of Union
Although the casino is expected to file objections to the election, UFCW Local 371 President Brian Petronella commented; more than likely down the road we will be negotiating a contract with Foxwoods.


Many Popular Stores Give Out BPA- Tainted Receipts
Cash register recipts have been found to be covered with BPA (bisphenol-A), an endocrine disruptor linked to cancer, reproductive problems, and other illnesses.


ShopRite Restocks Shelves With Latino Flavor
The ShopRite chain's newest and biggest Delaware store has launched a campaign to better serve the diverse needs of the area's Hispanic population.


City Hall News: Paid Sick Leave Bill Back In the Waiting Room
Council Speaker Christine Quinn is trying to show the business community that they are being heard, while offering no firm commitments about what kind of bill would ultimately be allowed to the floor.
Posted by Joe F. at 8/02/2010 03:33:00 PM No comments: