We Support Locked Out UFCW 342 Workers! 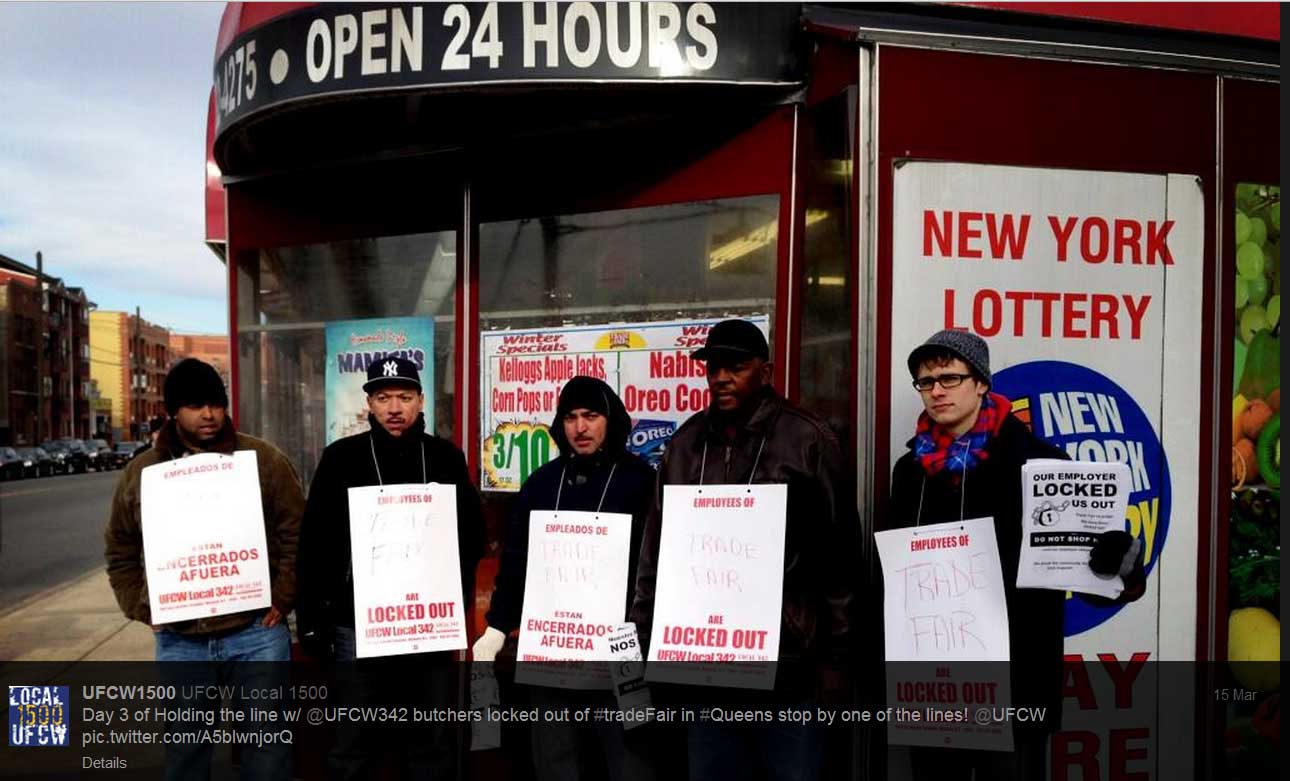 Throughout the last week we've been walking the picket lines with our UFCW Local 342 brothers and sisters who have been locked out by Trade Fair in Queens.

Over 100 meat workers throughout Trade Fair locations have been working without a contract since October and were all locked out last week.  The owner has posted "Help Wanted" signs throughout the neighborhoods and in the stores.   Ownership is demanding lower wages, and slashing benefits in his contract proposals.  It is simply unacceptable and has disrespected many of the workers.

The Times Ledger has picked up the story and so has Supermarket News.

What can you do: Stop by a picket line or Sign the petition online.  Go into a Trade Fair and tell the manager to respect their meat workers and negotiate fairly!

United Food and Commercial Workers Union (UFCW) Local 1500, Long Island and New York State's largest grocery workers Union, announced its endorsement of Thomas Suozzi for Nassau County Executive.  The endorsement is the first from organized labor since Suozzi announced that he would run for the office he previously occupied.

"The leadership and members of UFCW Local 1500 are excited that Tom Suozzi has entered this very important race.  The void in leadership and common sense governing that has plagued Nassau County for the last four years must be filled and there is no better person to do that than Tom Suozzi. Tom brought enthusiasm and strong middle class values to the job when he was County Executive and will once again prioritize the needs of those who live on Main Street over those of Wall Street.   Our Union will work tirelessly during this election and is determined to see Tom Suozzi return as Nassau County Executive,"

UFCW 1500 represents 23,000 members and promotes progressive policies such as demanding Wal-Mart be held accountable for it's unethical business practices, supporting the expansion of supermarkets into underserved communities and creating good food, good jobs and good health for all New Yorkers. UFCW Local 1500 also has an active "Women's Network," which assesses issues particular to women like domestic violence and breast cancer awareness and develops action programs to address them. Over half of UFCW Local 1500's 23,000 members are women.

March 2013
Article appears in our March 2013 Issue of The Register.
By: Joseph FedeleView in original PDF format

In 2006 Fairway opened a store in the seaside community of Red Hook, Brooklyn, a neighborhood starved for a quality supermarket.  The store was an instant success, creating over 300 union jobs and becoming a favorite among Brooklyn residents.  The store’s popularity helped Red Hook in a huge way, as small businesses began to grow surrounding the store to take advantage of the tremendous traffic Fairway received.   The 52,000 square foot store sits on the banks of the New York Harbor, with a spectacular view to the Statue of Liberty.  In November when Hurricane Sandy hit, the waterfront store was flooded with five feet of water, destroying millions of dollars in food, merchandise and equipment, and leaving hundreds of union members with nowhere to work.

UFCW Local 1500 members went to work after the storm, helping other disaster relief organizations clean up the damaged food and property.  “It was crazy, real crazy” said Theophilas Harvard, a union member for over 7-years, who helped clean the store days after the storm, “There was so much damage, we cleaned up for weeks.” Union workers helped clean up the destruction for over 20-days, filling over 70 dumpsters with damaged items.  The damage in the store was so severe officials announced it would remain closed for 3-months, targeting March 1, 2013 as a re-open date.
So what does an employer do with over 300 workers during the 3-month reconstruction? If you recall last year Target (a non-union employer) in Valley Stream closed for a 7-month reconstruction.  They laid-off nearly half of their 250 workers, and rehired a new workforce at lower pay upon reopening.   Fairway took a different approach.  They insured all 300 workers from Red Hook a job at another one of their 11 stores.
Sounds great, right?  But how would the workers from Red Hook get to their new temporary jobs at other stores, some over 25-miles away? Fairway provided free hourly bus shuttles to the temporary jobs.  When they could have easily taken the easy route and told employees “tough luck, you’re laid off”, like Target did, Fairway displayed the fabric of a responsible and sustainable employer. “In times of economic hardship having a company like Fairway giving every one of its employees an opportunity to work at another location until their home store reopens, is a testament to the type of company they are and type of strong labor relations we have with them,“ said UFCW Local 1500 Field Director Rob Newell.  “Our first priority is to ensure the safety and well-being of all our employees,” said Charles Farfaglia, Vice President of Human Resources at Fairway, "There would be no Fairway without them, they are Fairway."

Fairway also organized multiple relief efforts to help residents in need, donated nearly 3,000 turkeys to centers in Brooklyn and Staten Island and offered shuttles for residents to their Manhattan locations to sustain community access to food during aftermath of Hurricane Sandy.   As Thanksgiving rapidly approached, Fairway saw another opportunity to help their community and put together a Thanksgiving feast for over 4,650 storm victims, ensuring the devastated community would be able to celebrate Thanksgiving.
UFCW Local 1500 Members from Red Hook were shuttled to locations as far as New Jersey and Westchester, and as close as Manhattan.  11-year union member, Tomas Caceres, was glad to retain his job during the reconstruction, “It was an easy, it took about a week after the storm to get placed in a temporary store,” said Caceres, who is now working atKips Bay in Manhattan, “The storm was a shock, but I’m ecstatic to be able to work while Red Hook is getting reconstructed, and now my commute is actually faster!” Caceres joked.

Fairway plans on re-opening the store on March 1st.   The New York Times reported the repairing and reopening the store would cost close to $10 million.  With the grand re-opening approaching residents and transferred union members are getting excited about Fairway’s return to Brooklyn.   Alvin Augustin, a fish cutting master and union member for over 13-years, was transferred to two different Manhattan locations and is now temporarily working at the Kips Bay store.  “It’s one big family at Red Hook, I’m excited to go back to Brooklyn,” Augustin said, “I cut the best fish and Marty Markowitz (Brooklyn Borough President) is one of my biggest fans.”  Harvard, who helped clean up the damaged store will be returning in a few weeks to prepare to re-open it, “I’m excited to go back and re-open it,” Harvard explained, “I helped clean it up after Sandy, and now I’ll help re-start it, it feels good to do that.”