Day of Action to Support Mrs. Green's Workers Going Back to Work

This week, UFCW and UFCW/RWDSU Locals throughout Region 1 participated in a day of action on July 22, 2014 to support the eight unlawfully fired workers returning to work at Mrs. Green’s Natural Market.   The eight workers were leading union supporters in a closely contested union election in May 2013. 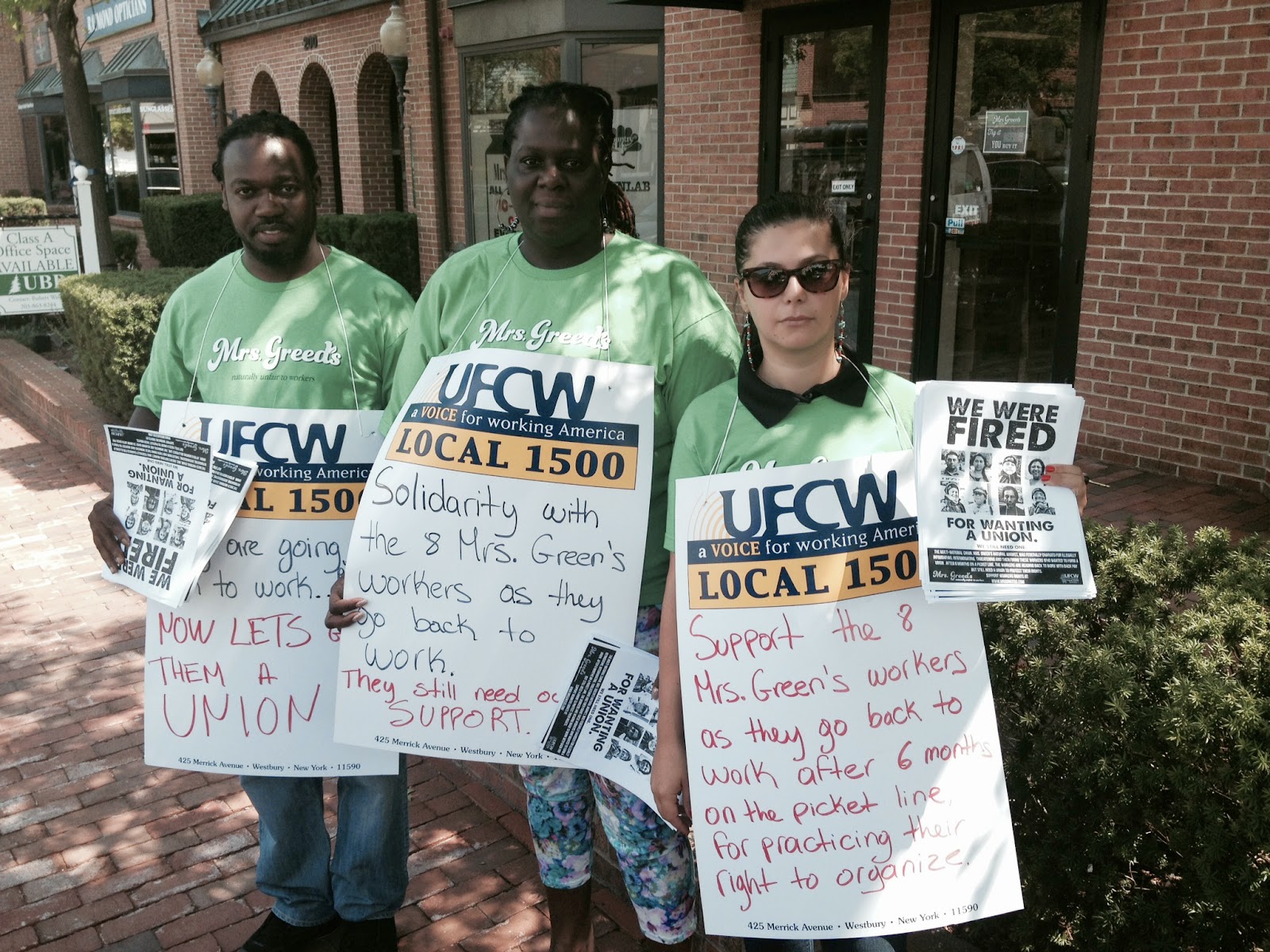 Afterwards, Mrs. Green’s was federally charged for intimidating and interrogating employees.  The charges were settled after Mrs. Green’s agreed to create a safe, intimidation free atmosphere, and post a federally issued notice on workers’ right to organize.  In January 2014 the eight workers were unlawfully fired for “poor job performance”.  The workers had over 60 years combined experience, some of them worked at the store for over 13 years.  Local 1500 filed more charges, alleging the firings were in retaliation for their union support.   Workers had been on a picket line in front of the store for over six months until the company settled and agreed to return the workers with back pay, days before a federal hearing on July 24, 2014.  The day of action commemorated the workers’ victory, fighting back against a multi-national employer.

“We're returning to work with the same fears we had in November, when we faced intimidation and threats before we were ultimately fired.  We still need protection at work and we still need your support.  The last time we worked inside the store, Mrs. Green’s illegal treatment of us led to the most difficult times in our lives, so thank you all for your support!” said Yesica Mendez, one of the eight unlawfully fired workers who returned to work on July 22.

After being federally charged by a NLRB Regional Director with unlawfully terminating 8 employees in January 2014 for "supporting a union," the Union has settled with Mrs. Green's, after agreeing to rehire workers with back-pay

United Food and Commercial Workers (UFCW) Union Local 1500 announced it has assisted eight unlawfully fired workers from Mrs. Green's in getting their jobs back with back-pay, after a Regional Director of the National Labor Relations Board charged Mrs. Green's Natural Market with unlawfully terminating them because "they supported the Union."
"Mrs. Green's did everything possible to avoid unionization, including firing eight longtime workers who gave a combined over 50 years of service to the company," said UFCW Local 1500 President Bruce W. Both. "We joined the brave workers, along with the Mt. Kisco community, on a picket line in January, fighting for what we all deserve, respect at work, and today justice prevailed."
The settlement between the union and company comes days before a NLRB hearing in which Mrs. Green's faced federal charges for unlawfully threatening and intimidating workers, and ultimately firing workers who supported Local 1500.

"Our fight has been long, but it is not over," said David Ramirez, an unlawfully fired worker who worked at Mrs. Green's for nearly 10 years, "We ultimately want and need protection at work, so we and all our coworkers don't have to work in fear that if we ever stand up for our basic rights, we will be fired and on a picket line for 6 months, fighting for what we all should be guaranteed at work. Nobody in this country deserves that."

Union President Bruce W. Both, noted that, although the settlement has put workers back to work, their struggle is far from over. "In November 2013, Mrs. Green's agreed to cease their anti-union conduct, promising to provide a safe, intimidation-free work environment for the workers. We all witnessed how Mrs. Green's took that responsibility; they illegally fired eight loyal longtime workers and put them on the streets during a frigid winter, fighting for their jobs back. Now, we're here, 6-months later, and nothing has changed; the workers are still fighting for the protection on the job they need, want and deserve."

For months, the Union urged the company to reinstate all unlawfully fired workers and to spare the workers and community the expense and strain of a hearing. The evidence that Mrs. Green's acted in violation of the law was overwhelming and the NLRB Regional Director found that these workers were not fired for their job performance but simply for standing up for their basic rights at work. The Union also extended their appreciation to the Mt. Kisco community along with the politicians who stood with the unlawfully fired workers during their struggle.

When asked about returning to work, Ramirez said, "We're happy to return to serve the community that stood with us during our struggle. We want respect, protection and security at work once we return."

“In today's Harris v. Quinn ruling, the anti-worker Supreme Court sided with those who want to deprive employees of any ability to collectively bargain with their employers. This decision primarily affects home health care workers, but sets a terrible precedent for other Americans seeking a voice on the job.

“This is the Supreme Court's latest attack on the foundation of our democracy. From weakening the Voting Rights Act to allowing unfettered corporate money in politics, the conservative justices are all too willing to do the bidding of anti-worker special interests. Workers and unions will respond to this latest attack as we always have—by redoubling our efforts to bring a voice on the job and fair wages and working conditions to all Americans.”