The NLRB has adopted the rule change, putting an end to "unnecessary litigation & delays" between filing for a union election and the vote.

Rumors are stirring that the NLRB could be shut down by next year.

The Retail Industry Leaders Association have released a statement on the NLRB rule change naming it the "ambush election rule".

The Seattle City Council has passed a law banning plastic carry-out bags! The bill encourages the use of reusable shopping bags by requiring grocers and retailers to charge a nickel for paper bags. The bill was also backed by UFCW-21 "We have the support of grocers, retailers, restaurants, labor unions, and environmental organizations in Seattle. We also have broad grassroots involvement from residents who have been emailing and calling in support of this issue for months now."

Rob Walton, Chairman of the Board for Walmart, won JWJ's annual 'Scrooge of the Year' contest.


The family’s dividends from their Walmart stock alone are more than $2 billion/year. Just using their dividends, they could ensure that a million Walmart employees make at least $12/hour. Instead, they are growing richer by the year. Even with all of this money, Walmart only pays an average of $8.81/hour to store associates. And the company has yet to meet with and address the concerns of those who work for them such as scheduling (especially during the holiday season). Just last month Walmart, under Rob’s leadership, slashed health care coverage for hundreds of thousands of Walmart employees and their families—right before the holidays!  What a scrooge! Check out more at JWJ.

The New York Observer sees through Target's new strive to be more 'local' at their Harlem store.

The AFL-CIO Blog points out that Lawmakers, not just CEO's, are the top 1% and maybe that's why it's so difficult to pass a millionaire's tax.  Summed up in an excellent article in today's  Washington Post: Growth wealth widens distance between politicians and constituents.

This morning Sears announced they will be closing 100 to 120 Kmart and Sears stores due to poor sales and lack of competition to rivals like Target & Walmart.  Earlier this year Sears announced they would close 10 stores.  Though all major media outlets continue to only focus on what this means for the stock and shareholders of Sears/Kmart, the closing of stores is expected to lay off or displace over 1,000 Sears/Kmart retail employees.  Our hearts and best wishes go out to those who will be affected by the store closings.

From The Associated Press:


Sears Holdings Corp. plans to close between 100 and 120 Sears and Kmart stores after poor sales during the holidays, the most crucial time of year for retailers.

The store closings follow its announcement last quarter it would shutter 10 stores. Kmart and Sears have a combined 2,177 U.S. big box locations and another 500 in Canada.
A list of which stores closing will be available at www.searsmedia.com.

Wall Street analysts have long faulted Sears for not investing enough to make its stores appealing. Sears is "effectively asking customers to pay for a poorer shopping environment" than other chains, Credit Suisse analyst Gary Balter said in a note to clients.
Balter was also surprised that Sears would borrow money during the holidays, which are typically a peak cash flow period.

Sears blamed poor consumer electronics sales in a tough economic environment "especially for big-ticket items" for more than half of the decline in its namesake chain's domestic same-store sales.

Today, in a small step forward to leveling the playing field for the working class, the National Labor Relations Board adopted a new, Republican criticized and attacked, rule which would eliminate and "reduce unnecessary litigation and delays" during the union election process.  The new rule will go into effect on April 30, 2012.  From the NLRB:

but under the current rules, inefficiency, abuse of the process, and delay still hamper resolution of many questions of representation.

In recent years, only about 10 percent of NLRB election cases have gone through the hearing process. Such elections have been held on average 101 days after the election petition was filed with a regional office.

“This rule is about giving all employees who have petitioned for an election the right to vote in a timely manner and without the impediment of needless litigation,” said Chairman Pearce.

You can read the press release from the NLRB with summaries of the proceedings here.  Earlier this November, House Republicans passed what was dubbed the Election Prevention Act, to combat the modest NLRB rule change.  The laws would give companies and corporations a tool-kit and a swiss-army knife for defeating unions and destroying workers' rights.   Republicans continue their attack on unions, workers' rights and the NLRB, though today a small victory towards creating a fair unionization process.

"Let Us Spend Christmas With Our Families!!"

UFCW Local 1500 is standing up to the A&P/Pathmark  company and is asking its executives to close stores on Christmas Day. Our members have faced a very stressful and difficult year and this is not the time to be taking away a holiday that should be spent with their families.  "A&P/Pathmark ended up in bankruptcy because of poor decisions by former management. Hopefully current management will not follow in their footsteps and respect their workers, their customers and the spirit of the Christmas season and keep these stores shut"- Secretary Treasurer Anthony Speelman.


Below is the letter written to the A&P/Pathmark executives.UFCW Local 1500 will hand bill company stores this week urging the public to contact A&P/Pathmark management and express their disapproval. Another way of showing your support is to sign and share this petition to show your solidarity.  By signing this petition you will be helping thousands of Local 1500 members get the chance to spend Christmas with their families. 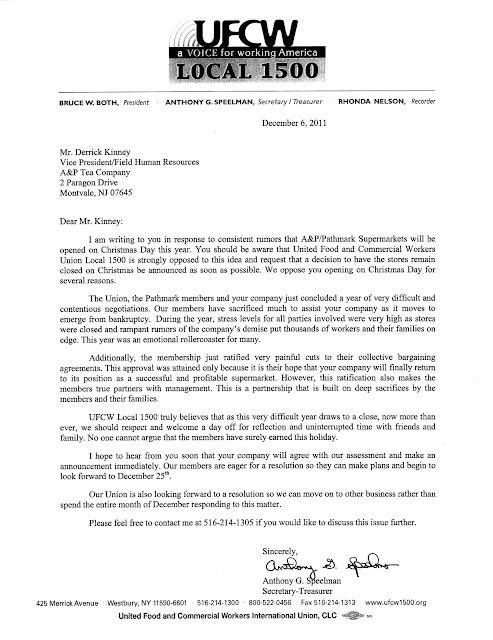 This Sunday December 11, 2011, Local 1500 will be hosting a Holiday Breakfast with Santa Claus at the Union Office!

All Local 1500 members are invited to attend with their families and all children under 11 years old will receive a free photo with Santa and a gift!


WalmartNYC
The New York Observer writes on how Walmart is constantly "woo'd" every week by brokers for their lucrative real estate deal if they open a store in NYC.   Since that's what it's all about, real estate commissions from Walmart, not their potential affects on surrounding communities and local business.

In India they're [Walmart] hearing a familiar complaint about opening and expansion, "You'll kill our local business."

Walmart is holding a community hostage explained the Mayor of Warren, as they won't agree to a developer building a new state of the art facility that will compete against them, forcing what locals call an eyesore next to the Walmart store.  “They basically have deserted the city of Warren and, rather than move out, they’re just paying their rent,”

Walmart's ballot-box tactics have California residents angered and feeling bullied by the mega-corporation.

Walmart really wants to do your taxes.

Forbes says $239 million is the cost to compete with Walmart.

Bankrupt A&P will fight on under concessionary bargains.

Target is trying to layoff their unionized employees who were recently acquired when they purchased the Canadian chain, Zellers.

Republicans are panicking about the NLRB rule change.

Stop and Shop is set to buy 3 King Kullen stores.

Buying holiday gifts made in America can help create jobs!

Huffington Post looks at Walmart's latest Chicago express store.  The store is 14,800 square feet and is expected to employ 45 people.

TheStreet.com says this is Walmart of the future.

The UFCW is Battling Target in Canada:

Target purchased many unionized stores for their Canadian expansion, the UFCW Canada is asking their labor board to declare Target as a successor employer, which would require Target to recognize the union as representing employees at that location after it becomes a Target store!  Target is claiming their acquisition of the stores was strictly for real estate.

Union Representing A&P Supermarket Workers & Company Reach a Deal to help the company emerge from bankruptcy and save nearly 36,000 Jobs

New York- November 30, 2011- After a year of intense negotiations, 13 Locals of the UFCW/RWDSU representing some 36,000 union members from Maryland to Connecticut have concluded negotiations with The Great Atlantic and Pacific Tea Company (A&P) and affiliated companies who filed for Chapter 11 bankruptcy in December of 2010.

Over a three-day voting period, union members from the 13 Local Unions ratified, by a large majority, new contracts with the company. The new collective bargaining agreements were constructed in such a way as to allow A&P to rebuild and emerge from bankruptcy, while at the same time protecting the jobs, the medical plans and pensions of the members of the various Local Unions.

Throughout the bankruptcy proceedings the UFCW/RWDSU Local Unions have remained united, negotiating as one group, to ensure the best outcome for the long term health of the company, the members working in the stores and the more than 300 communities A&P stores serve.

According to the UFCW/RWDSU this agreement, while concessionary in nature, was necessary to save the jobs of tens of thousands of members. UFCW Secretary Treasurer Marc Perrone said of the deal, “While we are never happy to be in the position of concessionary bargaining, we do believe that these agreements represent the best outcome for our members under the circumstances.” Perrone continued, “I am proud of the 13 UFCW/RWDSU Local unions who stood united and worked together to ensure that the new agreements minimize the impact on the lives of our members while providing the A&P companies with sufficient financial savings to help them emerge from bankruptcy.”

Perrone also stated, “A&P’s bankruptcy was entirely self-inflicted, as the company suffered through decades of leadership that knew very little about running a supermarket chain. While most of the people responsible for the bankruptcy are no longer with the company, we truly hope the new leadership team understands and appreciates the sacrifice our members are making to help save the companies they have served for years.”

The new contracts were a condition to the financing for A&P’s proposed plan of reorganization, and if the new contracts had not been ratified by the 13 UFCW/RWDSU Unions, A&P could have faced liquidation.

The new contracts will last five years and will take effect two business days after bankruptcy court approval of the agreements. A bankruptcy court hearing on such approval is scheduled to take place on December 5.