Check out our press release below:

WESTBURY, NY (01/30/2014)= United Food and Commercial Workers (UFCW) Union Local 1500, representing over 22,000 New York State grocery workers, announced today that they have endorsed Nassau County District Attorney Kathleen Rice to be the next Congresswoman from New York's 4th Congressional District. The Union cited D.A. Rice's nationally recognized effort to combat drunk driving and drugs which are issues of great importance to the membership of Local 1500.
"District Attorney Kathleen Rice has proven to be a leader who has the ability to be creative, courageous and forward thinking when it comes to the issues that affect the families of Nassau County," said Bruce W. Both, President of UFCW Local 1500.
"It was Kathleen Rice who fought drugs and the crime they bring to the neighborhoods of Long Island. Through her efforts there has been a significant reduction in crime and violence in Nassau County. Whether as an Assistant District Attorney in New York City, as a Homicide Prosecutor in Brooklyn, Assistant United States Attorney or as a Federal Prosecutor in the Philadelphia office of the Department of Justice, Kathleen Rice is a proven leader," Both stated.
"The people of the 4th Congressional District would be well served by sending Kathleen Rice to Washington, DC. UFCW Local 1500 is proud to endorse Kathleen Rice to be the next Representative of the 4th CD and believes she is exactly the type of leader necessary to bring all New Yorkers together," President Both concluded.
###
United Food and Commercial Workers Union Local 1500, based out of Westbury, New York, represents grocery workers in New York City, Long Island, Westchester, Putnam and Dutchess Counties. Members of Local 1500 are employed by A&P/Pathmark, Fairway, Stop and Shop, Gristedes, D'Agastino, Key Food, Shop Rite and King Kullen.
Stay up to date with UFCW Local 1500 on twitter @ufcw1500, facebook.com/ufcw1500, www.ufcw1500.org.
Contact UFCW Local 1500 at info@ufcw1500.org. 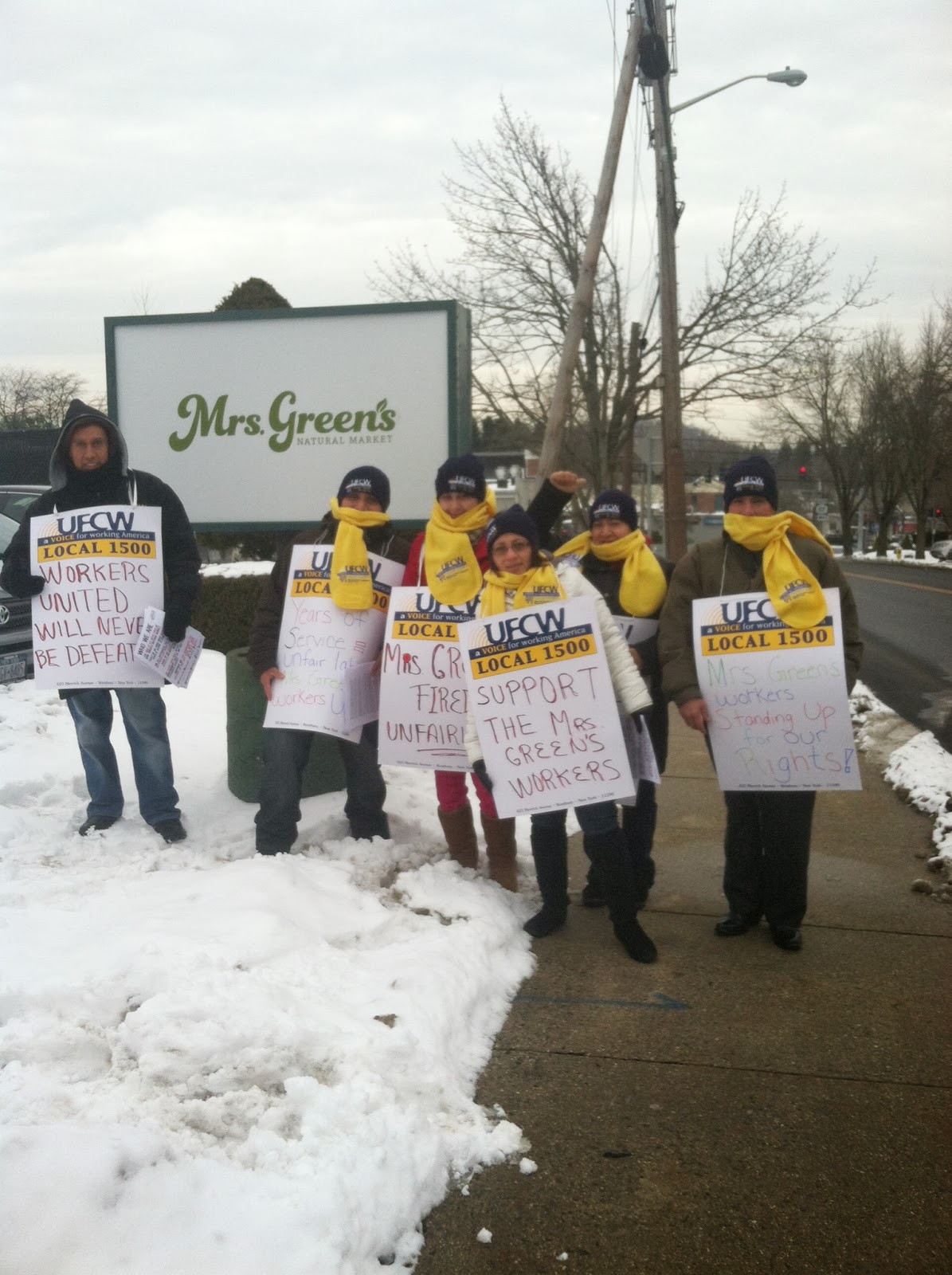 "We want to tell the community how Mrs. Green's treated us," said David Rameriez, who until two weeks ago worked for Mrs. Green's for over eight years, "They pride themselves on good food and good health, and as a neighborhood store...But they've shown no commitment to us, they've disrespected us."

Mrs. Green's Natural Market fired nine workers two-weeks ago for "poor customer service".  All of the terminated workers supported the union in an election last year, and some recently met with politicians and the union on working conditions at the store. 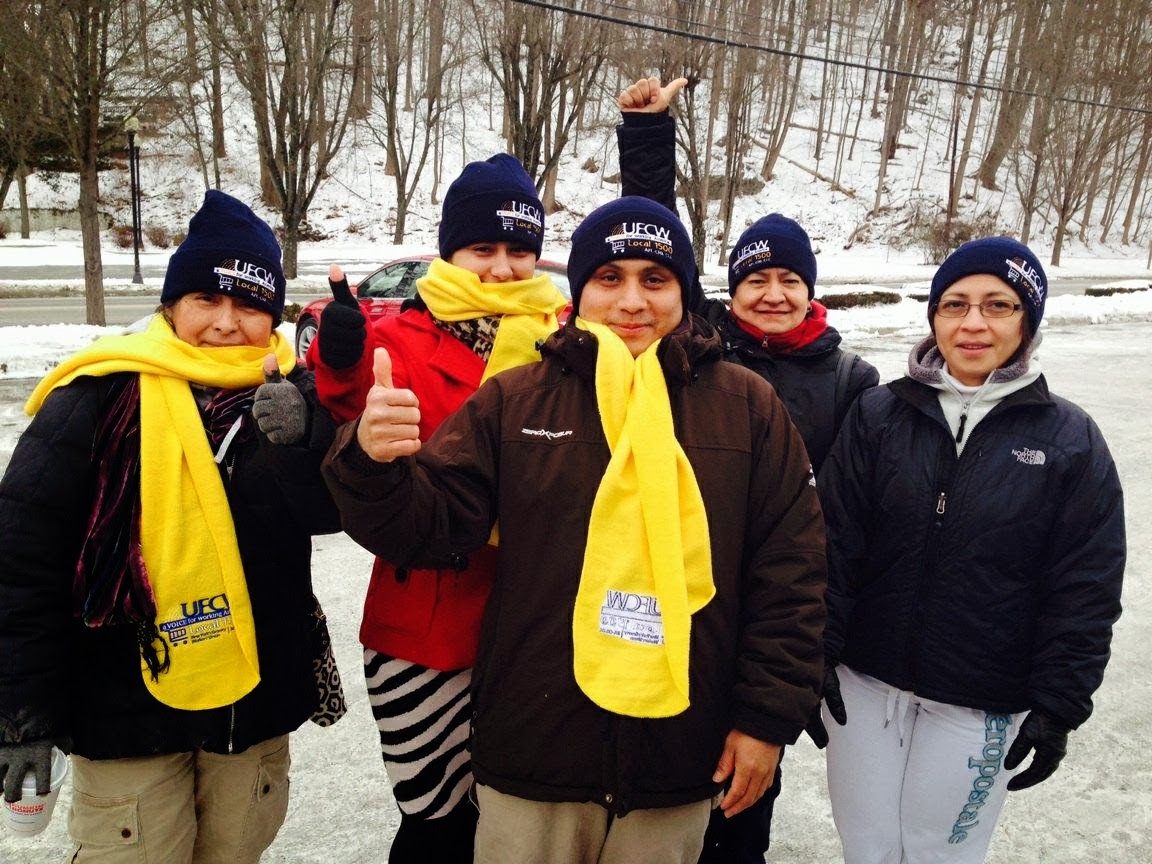 "We're not backing down, we're letting the community members know what we've served over the last decade.  Most of them know us and once they've heard how Mrs. Green's treated us, they told us they support us and will tell management they support us," Rameriez said. 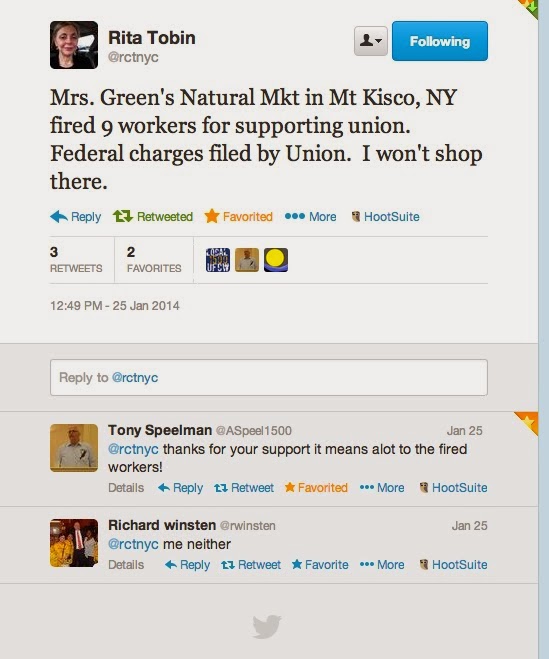 Throughout the weekend, community members were outraged that the "Natural Market" would sink this low and fire long-time employees for "poor customer service".  Many went inside to tell management their feelings, some left immediately saying they would no longer support the store and some even took to Twitter (left), like Rita Tobin, a longtime customer who won't be shopping at the store anymore.

UFCW Local 1500 organizers and the nine fired workers have been working hand in hand in alerting the public and putting Mrs. Green's on notice.  UFCW Local 1500 has filed federal charges against Mrs. Green's for the firings, calling them "retaliation" for supporting the union.

Support the workers on their picket line at: 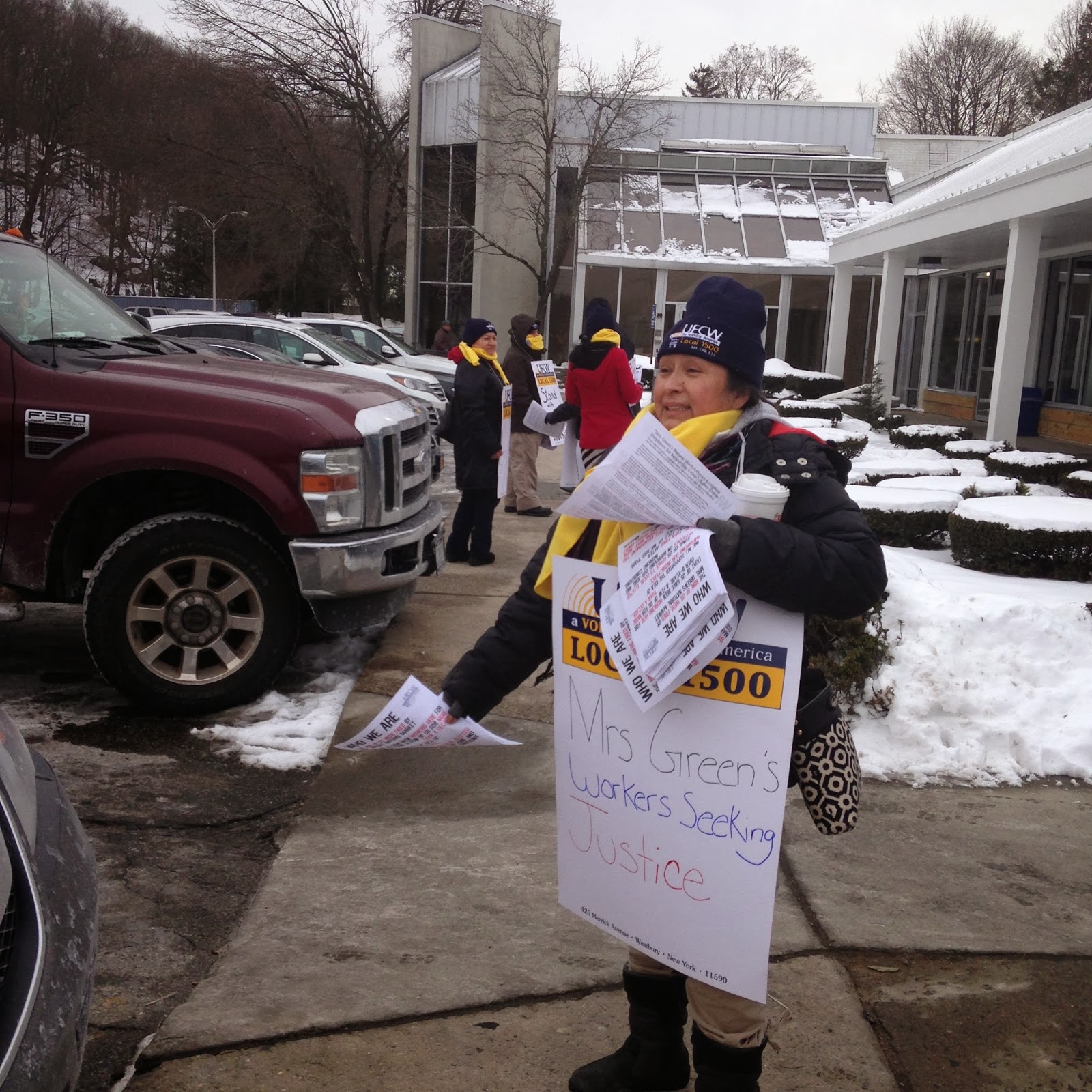 After standing up for their basic civil rights and speaking to local elected officials about solving problems at their job, nine workers from Mrs. Green's Natural Market in Mt. Kisco, NY were abruptly fired last week. The United Food and Commercial Workers (UFCW) Local 1500 called the firings '"retaliation" for standing up for "basic, protected, civil rights" and "supporting the union".

All of nine fired employees supported the union in a highly contested union election in May 2013. After employees filed charges that Mrs. Green's was violating their civil rights, the Federal Government charged Mrs. Green’s with violating labor laws.  Subsequently, Mrs. Green's committed in writing, to the National Labor Relations Board that it would respect its employees' rights to join and support a union, and refrain from retaliation. It posted a federally-issued notice in the Mt. Kisco store, informing employees of their basic rights at work, including the right to organize a union.

Reneging on its promise to the workers and the government, it has fired nine long-term employees, eight of whom have been with the company for over seven years and the least senior for over three years.

"They told me I was fired for poor customer service and that sales were low," said David Ramirez, an eight year employee who was fired last week. "It came as a shock to me and all of us, we were all told the same reasons for being fired. It's not a coincidence that all of us supported the union. I just stood up for what I believe in," said Ramirez.

The union has filed federal charges against the company on behalf of the fired employees and is planning a comprehensive public outreach campaign with Mt. Kisco community members. "Not only are the firings a retaliation, but Mrs. Green's has demonstrated a clear disrespect for labor law, and basic civil rights of their employees," said Secretary-Treasurer Tony Speelman, "These brave employees were not just on the job for a few days, some of them have over 10 years experience at Mrs. Green's. It disgusts me a company would sink this low to prevent workers from banding together to improve their workplace."

"It is a fundamental right of all Americans to participate in a union election without facing intimidation, interrogations, threats that their store will close and they will lose their jobs. Mrs. Green's management did every thing in their power to deny these workers their rights under law," Union Organizing Director Aly Waddy said, "Now, with these unjust firings, Mrs. Green's is following through with their threats, they've fired employees who have stood up for their fundamental rights as Americans, and intimidated even more workers."

"Mrs. Green's pledges a commitment to good food and good health for their customers but as soon as we united to demand good jobs, Mrs. Green's true colors came out," said Marta Urgiles, an employee of over 10 years who was fired last week, "We've supported the company and community of Mt. Kisco for years, for it to end like this, right after the holidays, is despicable" said Urgiles.

Community members throughout Mt. Kisco were outraged to hear the news of the firings and have reached out to the fired workers to pledge their support.
###
United Food and Commercial Workers Union Local 1500, based out of Westbury, New York, represents grocery workers in New York City, Long Island, Westchester, Putnam and Dutchess Counties. Members of Local 1500 are employed by A&P/Pathmark, Fairway, Stop and Shop, Gristedes, D'Agastino, Key Food, Shop Rite and King Kullen. Stay up to date with UFCW Local 1500 on twitter @ufcw1500, facebook.com/ufcw1500, www.ufcw1500.org.

Whole Foods is extending more money to farmers, but their stock took a huge hit this week.  Fresh Market has also been downgraded to "STRONG SELL".

When a Superfresh and a Pathmark closed doors, opportunity opened for Walmart to expand stores for groceries near Atlantic City.

Melissa Mark Viverito was elected as the new speaker of the New York City Council, unanimously.  Melissa has been a champion of workers' rights and has been outspoken on protecting New York City from Walmart.

This editorial board from Oregon sets the record straight on "Right to Work" legislation.


Right-to-work is a misnomer. If proponents were straight with us, they’d call these transparently vindictive efforts a “Right to Weaken Unions Act” or a “Right to Punish Those Who Oppose Us Measure.” The laws drain money from unions under the guise of creating a more business-friendly environment for states.

Millennial's are the key to fighting back against Low Wages in our country.   An Illinois Gubernatorial candidate actually proposed to cut the minimum wage by $1...Then realized, not smart.