This was the first of many changes employees were about to endure throughout the next year. Throughout the changes longtime employees stood up and began to demand better treatment from management. An overwhelming number of workers filed for a union election in May, losing by just three votes. Afterwards, the National Labor Relations Board (NLRB) charged Mrs. Green’s with violating federal labor law, performing illegal interrogation and intimidation of employees in the weeks leading up to the election.

After charges were filed, employees from the store began to meet with local elected politicians, including Assembly Member Shelly Mayer, to discuss the difficulties they face every day at their job. Workers were thrilled to meet with and receive the support from their elected officials who took the time to speak to them about their lives. The federal charges were settled in November, and Mrs. Green’s agreed under federal order to post a notice in their store for 60-days. The notice notified Mt. Kisco employees of their basic rights that were protected under federal laws. 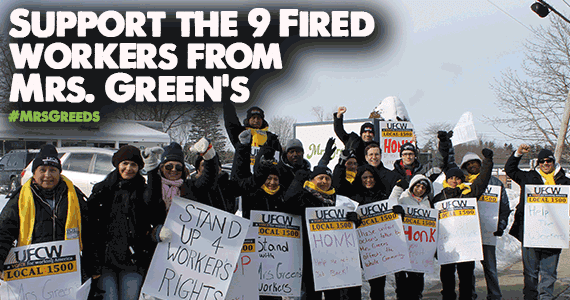 During the 60-day posting, Mrs. Green’s abruptly fired nine pro-union workers for “poor customer service”. A majority of the fired workers had over seven years on the job; some had worked for the company for over a decade. The fired workers were not only leading supporters of the union in the election, but were the same workers who met with politicians in the Mt. Kisco area for help. We have since filed federal charges against Mrs. Green’s and called the firings illegal retaliation and are hopeful they will all be reinstated.


Many of you may have seen the workers in front of the store the last two weeks, notifying customers they have come to know over the last decade, they were fired for “poor customer service.” There has been an outpouring of support from former customers who have pledged not to shop at the store. Today, community members, community groups, and former customers will join the fired workers on their picket line, calling for a boycott of the store until the fired workers are reinstated. Local politicians will also be there to support the fired workers and the community. Please come by and show your support for the men and women who have helped sever you at Mrs. Green’s for the last decade and demand management reinstates the workers.

For more info on any of these events please head to www.ufcw1500.org.

Fired workers on picket line in front of the Mt. Kisco store
Nine longtime workers were recently fired from their jobs at Mrs. Green's Natural Market in Mt. Kisco, N.Y.. Most workers have been with the company for over a decade. Workers were recently speaking with elected officials on organizing a union and improving their workplace. When customers heard about the firings, they were outraged and are now demanding the fired workers they have come to know over the last 10-years be reinstated. Community members are joining the picket line to demonstrate to the company they will not stand for this kind of treatment of employees.