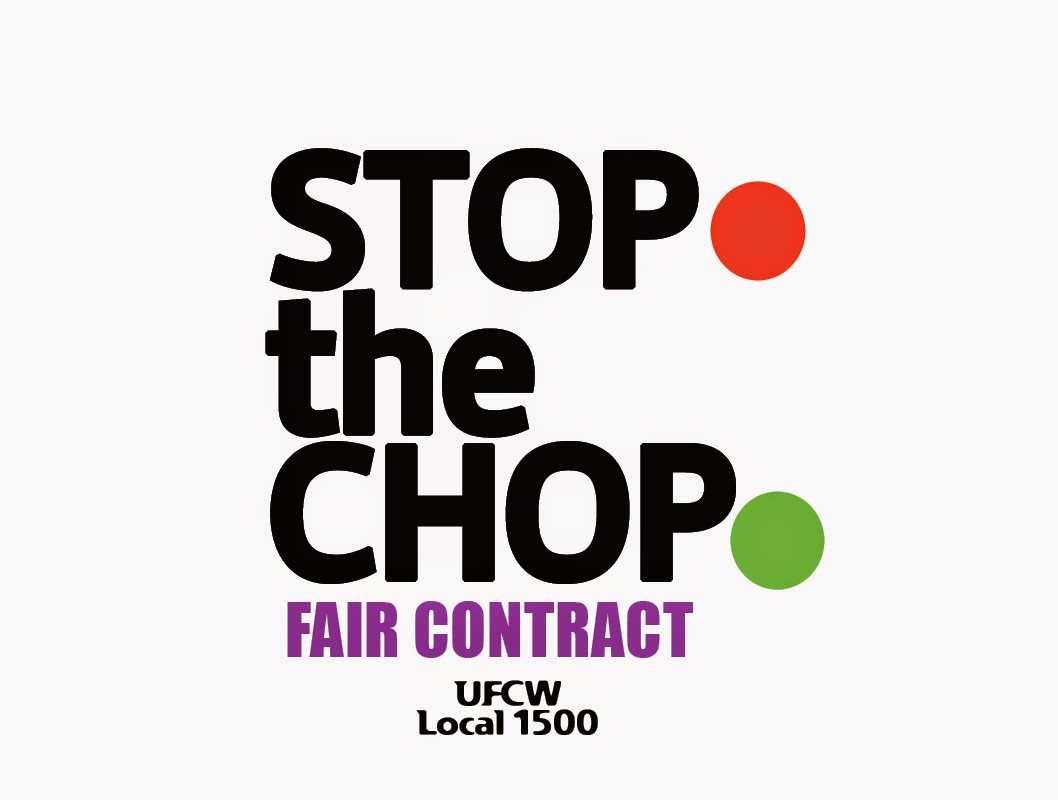 Our brothers and sisters throughout New England are negotiating with Stop & Shop. We've been with them during negotiations and have been attending regular meetings to pledge our support to the more than 35,000. The company has already taken up ads throughout local newspapers for replacement workers. Our UFCW brothers and sisters have been negotiating in good faith, asking for nothing but respect and to take care of the men and women who have made Ahold so successful.

It's very important to pay attention to these negotiations, as they will affect our negotiations with Stop & Shop.

Here's a message below updating progress on the New England Stop & Shop negotiations:


A MESSAGE TO ALL STOP & SHOP MEMBERS & THEIR FAMILIES

As part of our great union family, we all have a responsibility to work together to improve and better the lives of all our members – regardless of what town we call home.  Right now, more than 35,000 UFCW members in New England – represented by five Locals –are engaged in contract negotiations with the Stop & Shop Company. From the very beginning, these Locals have negotiated in good faith, and all we’ve asked of Stop & Shop is to do what is right by our members and their families.
The simple truth is that Stop & Shop is a success because of you and all our members who work there. It is because of your dedication and commitment to serving our customers and the communities we love, that Stop & Shop succeeds.
Instead of doing what is right, Stop & Shop presented contract proposals that were nothing short of a slap in the face to these men and women – people just like you.
Not only is Stop & Shop refusing to respect the hard work of our New England members, they are proposing dramatic changes to these contracts.
Stop & Shop’s actions are wrong.
While your contract may not be involved, what the company is proposing is a threat to every member of our union family.
Make no mistake, Stop & Shop’s actions in New England – if unstopped – will set a lower standard that the company will use when YOUR contract is up for negotiation. This is an issue that MUST matter to all of us.
Join with us, and stand with our brothers and sisters in New England. Help them, and help all of us, fight for the better life and good contract we all earn through our hard work.
So, here are the two things we’re asking you do:
First, call the Stop & Shop Customer Service Number at 1 (800) 767-7772, and tell them to stop threatening our New England members and their families. Tell them that you and your local stand with our New England union family. Tell them to do what is right.
Second, please tell your family and friends to do the same. Every call will send a clear message that we are a proud union family.
We stand together. We fight for each other – no matter where we call home.
Thank you for all that you do, and for the privilege of serving you: 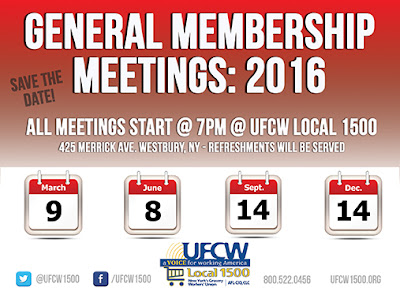 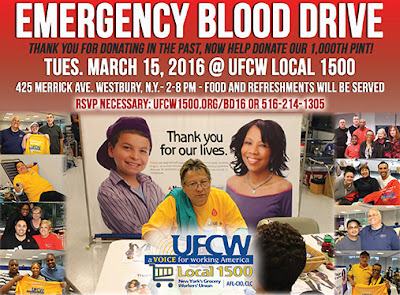 Please join us in helping the New York Blood Center on March 15th from 2-8 PM at our Union Hall.

Food & refreshments will be served and prizes, and a donation t-shirt will be awarded to all donors and volunteers.


For more info please visit www.ufcw1500.org/bd16 or RSVP. All friends, family are welcomed to the emergency blood drive!

Late U.S. Supreme Court Justice Antonin Scalia’s biggest fans and greatest detractors might not see eye to eye on much, but on this they would agree: Justice Scalia believed first and foremost in the Constitution of the United States. The specific words were the focus for many of his decisions and dissents during his three decades on the bench of the Supreme Court.

Article II, Section 2 of the Constitution states that the President shall have the power to nominate, with the advice and consent of the Senate, Justices of the Supreme Court. Nowhere in the Constitution does it say the President or the U.S. Senate should put aside these responsibilities because of politics or a presidential election, and we cannot let partisan bickering cripple the nation's highest court.

Washington gridlock has already succeeded in largely immobilizing the legislative and executive branches of our federal government. To allow it to now paralyze the judicial branch, in defiance of the U.S. Constitution, would be a disservice to both parties and to Justice Scalia's legacy. And this is not an academic exercise. The current Supreme Court term could be one of the most important in the last 50 years, with cases affecting women's health, immigration and workers' rights.

This only underscores the fact that the American people deserve an orderly and swift confirmation process, and that’s why I wrote an op-ed, which you can read here.

The Constitution lays out clearly the guiding principles of our government's responsibilities to the people. Some of the most important responsibilities are shared between the different branches of government for the very reason that divided control would force both parties to work together. We will have failed our founding fathers and the document they signed if our parties' leaders are no longer willing to even try.

Politics are always hard to put aside, even harder in an election year. But in this moment both Democrats and Republicans need to put their Constitutional responsibilities first. That’s what we've done here in New York, that's what needs to finally happen in Washington D.C. and that's what the legacy of Justice Scalia deserves.

Job Posting Announcement
In the wake of the A&P bankruptcy, we will be periodically sending job postings to our members who were displaced and affected by the bankruptcy.
Bogopa Food Bazaar is hiring!

The former Pathmark store in Brentwood is seeking both Full and Part-Time help.
Most applicants must be available to work 30-hours or more a week.

Competitive wages will be offered.
Starting Thursday, February 18th, management will be conducting interviews and hiring on-site at their new Brentwood location.

New legislation will provide a 90-day job protection for grocery workers who face unemployment through no fault of their own.

The GWRA (Int 632-2015) provides for a ninety-day transition period to eligible employees following a change in ownership of a grocery store. 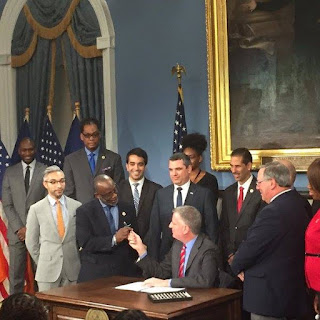 The transition period is a temporary protection for employees who may face unemployment through no fault of their own. The grocery industry makes up a significant portion of New York City’s retail workforce with over 50,000 employees and roughly two-thirds of this workforce coming from immigrant labor.

As we know first hand, our industry suffers from a volatile condition with the eminent merger, closing or the establishment of new ownership of our supermarkets jeopardizing the future of workers and the quality of life of countless communities. The recent A&P bankruptcy has provided a vivid example of this, affecting over 30,000 men and women throughout the northeast. 52 stores were impacted throughout the five boroughs including subsidiary brands such as Pathmark, Waldbaum’s, Food Emporium, and Food Basics. Some stores have been closed, others sold or auctioned, or even transformed into non-supermarket entities.

Council Member I. Daneek Miller (who proposed the GWRA) noted the importance of the act for both workers and communities in New York City, “Through this legislation we are able to provide communities with stability that would otherwise not exist during grocery transitions. We have already seen the terrible impact that A&P’s bankruptcy had on families throughout the City, and we don’t want to see such again. High worker retention rates are consistently associated with higher customer satisfaction. Experienced employees provide better service – they can find items more quickly, check out customers more efficiently, and provide culturally competent service,” said Council Member Miller.

Retention also keeps operating costs down, passing savings to communities. Turnover, from new training to lost productivity, costs the supermarket industry as a whole close to $5 billion a year. "All too often when supermarkets change ownership, workers' job security is uncertain at best," said Bruce Both, President of UFCW Local 1500, New York State's largest supermarket Union. "It is not fair to these working men and women or their communities, where union wages serve as economic anchors. I commend Councilman I. Daneek Miller, the Progressive Caucus and the entire New York City Council for passing legislation to end this injustice and provide grocery workers in the City of New York with a 90-day window to showcase their skills and stabilize the transition for the community."

The GWRA applies to grocery stores (or retailers with grocery departments) 10,000 square feet or larger excluding areas for storage, loading, food preparation, or eating. For perspective, this size is larger than three professional tennis courts combined and could serve to park roughly 100 midsized sedans. The legislation’s provisions apply only to workers who have worked a minimum average of eight hours a week and have been employed at the establishment for the previous six months.
Posted by UFCW Local 1500 at 2/09/2016 09:43:00 AM No comments: