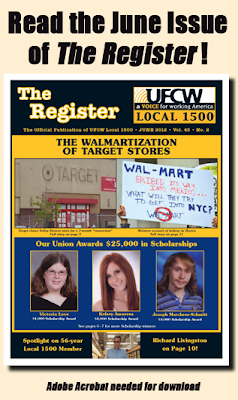 UFCW Local 1189 will be having a union election at Aldi.

Fairway Market will be moving into an old Pathmark at Woodland Park, NJ.

The Record: Sam Martin: The man with the plan to save A&P.

A new ShopRite opened in Baltimore, bringing 250 new jobs to the neighborhood.


Walmart shareholders were urged not to re-elect Mike Duke as CEO.  Meanwhile U.S. lawmakers are frustrated with Walmart's lack of cooperation in the Mexican bribery investigation.

The Walmart in Sullivan, New York, has failed its' 4th health inspection, the store is infected with rodents.  The store could shut down if they fail a 5th.


On April 25, inspectors found 9 pounds of defiled food, more than 1,000 fresh droppings behind the chips and snacks, and three dead mice carcasses. On March 2, mouse droppings and mouse trails were found around the soda, pet foods and bread aisle. On Jan. 3, inspectors found 35.9 pounds of defiled food and 1,000 fresh mouse droppings behind the peanut and snack racks.

The Business Insider asks if this is the 'Most Disgusting Store in the Country?'

The Chicago Tribune wonders what affect the Mexican bribery scandal will have on Walmart's annual company party.

A&P is expanding "Localized Remodels" starting with the Food Emporium on the Upper East Side.

Workday Minnesota loves writing about Target workers getting a re-vote in Valley Stream. 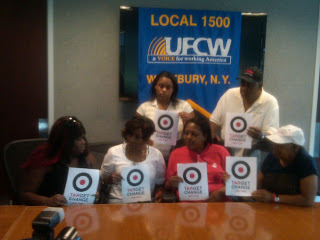 The National Labor Relations Board has ruled Target violated the numerous federal labor laws in an effort to keep their employees from joining the United Food and Commercial Workers Union Local 1500 last June. The ruling is a victory for all working men and women whose rights have been trampled on countless times by mega-retailers like Target & Walmart.  These retailers act as they are too big and too powerful to be held accountable for their disregard of workers’ rights.

Target is a company where the need for change is blatantly obvious.  The ruling confirms Target had no regard for the law or the civil rights of their employees, poisoning the democratic election process in order to keep their employees at Valley Stream from joining our Union and gaining better working conditions.

The brave workers from Valley Stream withstood flagrant attacks on their civil rights, captive audience meetings, anti-union video brainwashing, threats and scare tactics during last year's union election.  As one of the largest retail employers in the country, Target could – and should – lead the way in making sure that retail jobs are good jobs—not jobs where core American values and rights are trampled on in order to resist employees from joining together to demand better from their employer.

Target's actions last June were an injustice to workers' rights throughout our country along with the one ideology our nation was built on, democracy. Workers have a right to band together and join a union, though retailers like Walmart and Target will do anything too keep them from achieving this through a fair process, including disregarding the very fabric our country was built upon, democracy. 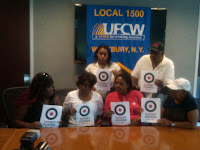 A National Labor Relations Board Judge has ruled Target violated numerous federal labor laws in an effort to keep their employees from joining the United Food and Commercial Workers Union Local 1500 last June. We said it last year when we filed our complaint and charges against Target, now an NLRB Judge agrees.

The ruling confirms Target violated the law and poisoned the democratic election process in order to keep their employees from gaining a voice and better working conditions.

Read the story at The Associated Press: http://m.apnews.com/ap/db_268743/contentdetail.htm?contentguid=CG8qn3nz

This week the UFCW International launched their first ever smart phone app!  To put it simple, it's  awesome and we recommend downloading it asap!

For consumers who wish to make informed choices about where they shop, the app is a major development that will support workers who are coming together to preserve good, family-supporting jobs in our communities. 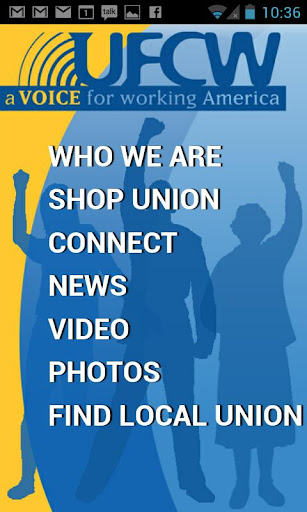 This is all made possible by the app's "Shop Union" feature. Now, anyone in the United States or Canada can pull up driving directions to their nearest union store on their phone- with a push of a button.

The smartphone app will also allow users to be constantly connected with updates from union members, breaking news, and original video. Information about how to take action for working families is at the user's fingertips.

We all know it's time to raise the minimum wage in N.Y., it's been long overdue... Did you know West Virginia and Arkansas have higher minimum wage rates than us?  Who has a higher cost of living?

Wanna help raise it? Get involved, print the petition out, sign it, ask your coworkers to sign and either email it back to us or give it to your Union Representative.  Sign the petition online here: https://www.change.org/petitions/raise-new-york-s-minimum-wage-to-8-50-an-hour 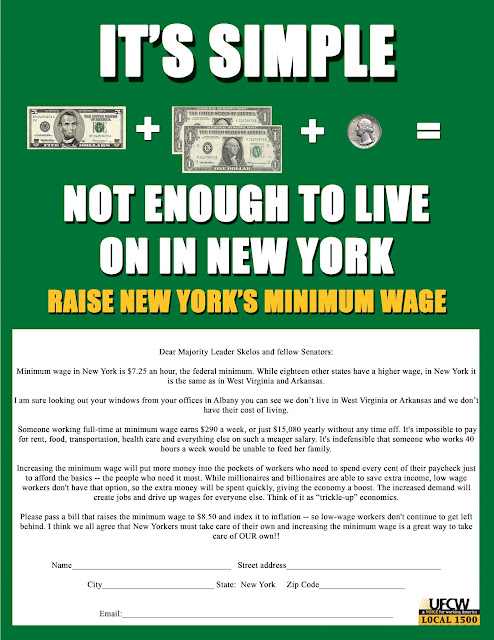 Aldi has expanded into Houston, Texas.

Citing a violation of procedure rules, a judge has overturned rules which were passed last year to amend NLRB Union Elections.

Check out the latest issue of UFCW's OnPoint below: 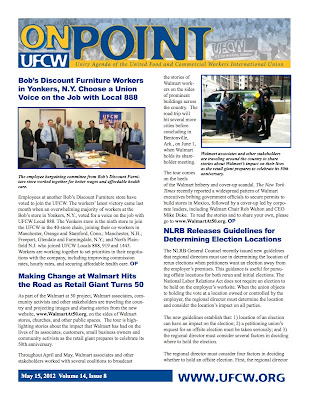 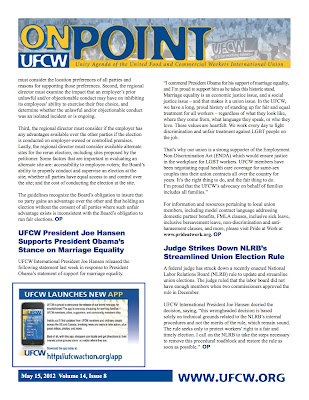 “I commend President Obama for his support of marriage equality, and I’m proud to support him as he takes this historic stand. “Marriage equality is an economic justice issue, and a social justice issue – and that makes it a union issue. In the UFCW, we have a long, proud history of standing up for fair and equal treatment for all workers – regardless of what they look like, where they come from, what language they speak, or who they love. These values are heartfelt.

We work every day to fight discrimination and unfair treatment against LGBT people on the job. That’s why our union is a strong supporter of the Employment Non-Discrimination Act (ENDA) which would ensure justice in the workplace for LGBT workers. UFCW members have been negotiating equal health care coverage for same-sex couples into their union contracts all over the country for years. It’s the right thing to do, and the fair thing to do. I’m proud that the UFCW’s advocacy on behalf of families includes all families.”

“I commend the DNCC for doing the right thing. The allegations of bribery and corruption against Walmart are serious and there is no way to know whether these contributions are tainted. Furthermore, Walmart has a long track record of mistreating their workers, discriminating on the basis of gender, trampling on the right to organize, and fostering a race to the bottom in the retail industry that is bad for the middle class and our entire nation. Walmart is also a flagship member of the controversial right-wing American Legislative Exchange Council (ALEC), which has been linked to laws busting unions and weakening voting rights. Simply put, this is a company whose conduct flies in the face of the values we stand for as Democrats. I hope the DNCC’s decision to return these gift cards signals the beginning of the end of the Democratic Party’s relationship with Walmart.”

###
The United Food and Commercial Workers International Union (UFCW) represents more than 1.3 million workers, primarily in the retail and meatpacking, food processing and poultry industries. The UFCW protects the rights of workers and strengthens America’s middle class by fighting for health care reform, living wages, retirement security, safe working conditions and the right to unionize so that working men and women and their families can realize the American Dream. For more information about the UFCW’s effort to protect workers’ rights and strengthen America’s middle class, visit www.ufcw.org, or join our online community at www.facebook.com/UFCWinternational and www.twitter.com/ufcw.

It's right around the corner! Register today for this great event we're co-sponsoring with our friends from Food Chain Workers Alliance and Align!  Register here: http://foodworkersandjustice.eventbrite.com/ 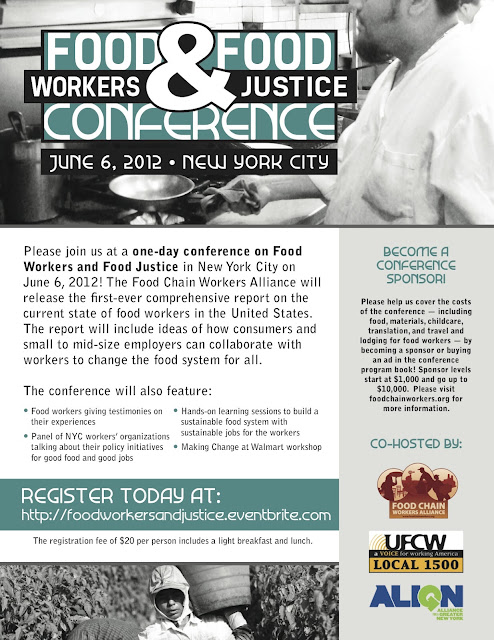