Top News from This Week:

We Support Striking Bus Drivers, You Should To! 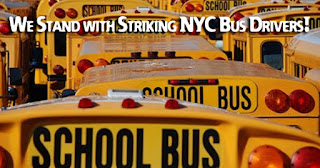 The last time New York City School Bus Drivers were on strike was 1979.  Yesterday, New York City Bus Drivers went on strike for a simple reason, job protection.  The growing trend in our country to  find a "better deal" and save money by tossing workers' rights and lives aside, is outright inexcusable.  A heads up to Mayor Bloomberg, you're not saving money or doing your city any good when you try to implement policy that degrades the lives of thousands of New York City residents.  Allison Kilkenny of the Nation sums it up best:


Local 1181 of the Amalgamated Transit Union, is asking for Employment Protection Provisions to be included in the new contract to protect workers from losing their jobs to newer, cheaper labor.

It matters because how we treat those who care for certain children reflects how we value those children. It creates a system in which workers entrusted to be responsible for a child’s safety are utterly replaceable in the name of protecting the bottom line.


UFCW Local 1500 President, Bruce Both,  has called and written a letter to NYC Mayor Michael Bloomberg, expressing our disgust and disappointment in the administration's actions. 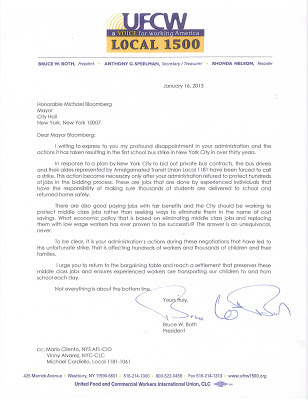 Support striking Bus Drivers by signing the petition or heading to a picket line to stand with thousands of workers fighting to protect their jobs, livelihoods and families.

United Food and Commercial Workers Union Local 1500 announced today that they have endorsed the candidacy of Donovan Richards Jr. to represent the 31st Council District, which was vacated by now New York State Senator James Sanders Jr. after his election win in November of last year.

“I’m honored to have been endorsed by UFCW Local 1500 today and look forward to joining them on the frontlines in ensuring that all New Yorkers can achieve the American dream.  During a time when my district is still reeling from the aftermath of Hurricane Sandy, and many of our local supermarkets and workers were adversely affected, we need leadership that is ready to hit the ground running on day one,” said candidate Donovan Richards.

“Donovan will fight alongside UFCW members to bring good jobs and good food to underserved communities, demand that Walmart will be accountable for its unethical business practices, and continue to support and stand with those that have been devastated by Hurricane Sandy in the Rockaways. Donovan is the type of progressive leadership that is needed in the City Council to represent the working men and women of this city,” said Patrick Purcell, assistant to the President of UFCW Local 1500.