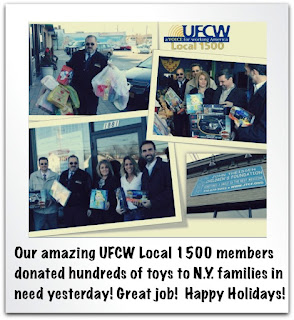 World Doesn't End, So Here's the Top News from This Week

Must Read: Walmart's Bribery Aisle: New details have emerged from the New York Times on the extent of Walmart's briberies in Mexico.

Update on the OUR Walmart Movement: "We are Winning!"

Fresh Market announced plans to open a new store in Saratoga N.Y.  They also plan on opening their second New Jersey store in 2013.

The Teamsters are back on a strike at United Natural Foods warehouse after calling it off last week.

This year during your holiday shopping, support Union Made Products and Union Employers!  Below are a few links on where to find 'em.

Check the UFCW International site, where they put together a little blog on where to shop here.

Also scope their Pintrest Board of Union Made Products.


You can also check out their Union Shopping Guide: http://americanrightsatwork.org/blog/unionshop/

Labor 411 wraps up all the Union Products you'll need this holiday season!

Last week Santa Claus visited our Union office to celebrate the holiday season, eat breakfast and give out gifts!  Check out all the pictures on our Google + Page! 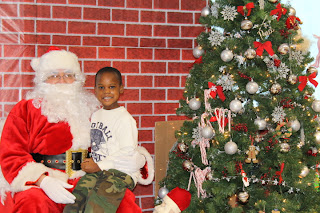 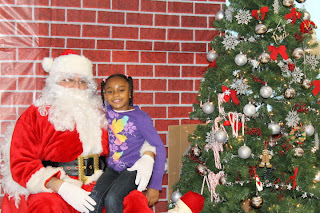 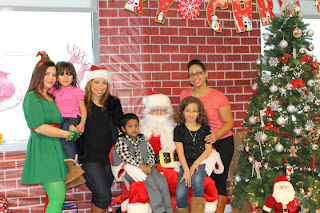 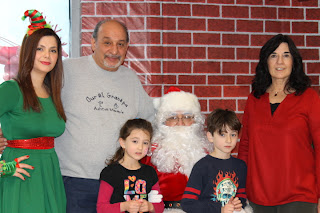 Christine Quinn for Mayor of NYC

United Food and Commercial Workers Union Local 1500, representing over 23,000 New York State grocery workers, announced today that they have endorsed New York City Council Speaker Christine Quinn to be the next Mayor of New York City.  The Union cited Speaker Quinn's progressive stance on several issues of great importance to their membership and the supermarkets that employ them.

"For the past decade, Speaker Christine Quinn has proven to be a leader who has the ability to be creative, courageous and forward thinking when it comes to the issues that truly affect the livelihood of our members," said Bruce W. Both, President of UFCW Local 1500.

"It was Christine Quinn who, from the first day Walmart announced its intentions to enter the New York City market, demanded that before they open their doors anywhere in the five boroughs the world largest employer be held accountable for their irresponsible business model that has devastated communities, mistreated workers and created predatory business practices," Both stated.

"Prior to Speaker Quinn's development of Food Works New York, a long term, comprehensive plan for New York City's food system, there was no real discussion taking place in New York City around establishing a progressive food policy that focused on opening new supermarkets and bringing good health, good food and good jobs to New York City's food deserts. Speaker Quinn knew that in addition to working on long standing problems that New York City residents have faced for years, such as affordable housing and transportation, it was time to take a hard look at the City's food system and understand its impact on our economy and healthcare system. The passage of the FRESH program while she was Speaker was historic" President Both continued.

"Lastly, Speaker Quinn understands that wages matter in growing the economy of this city and sustaining a strong middle class. Through her support for laws that set either living, prevailing or minimum wages for workers in various sectors of our economy, Speaker Quinn has shown a commitment to making sure workers are paid fairly and understands that no economic policy built around the ever growing wage inequities that exist today is neither smart nor sound policy."

"For all of these reasons, as well as several others, UFCW Local 1500 is proud to endorse Speaker Christine Quinn to be the next Mayor of New York City and believe passionately that she is exactly the type of leader necessary to bring all New Yorkers together with the goal of strengthening our economy, providing our children with the best education possible and ensuring all city residents can live, work and prosper in the greatest city in the world," President Both concluded.

Check out the latest issue of UFCW's OnPoint, where President Both and Local 1500 staff are highlighted for helping Hurricane Sandy Victims in need.  You can check out more on Local 1500's recovery efforts here.  Additionally if you were affected by Super Storm Sandy, please apply for relief from the UFCW fund here. 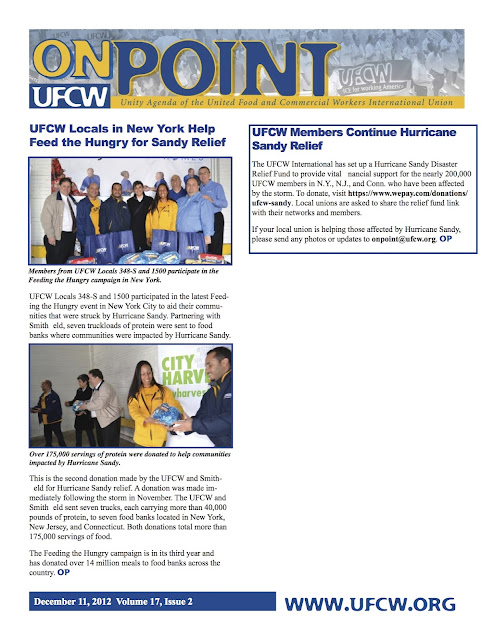 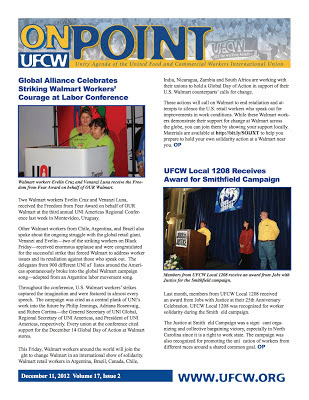 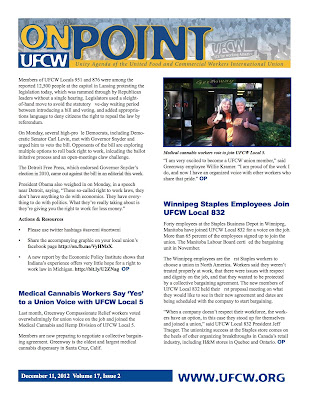 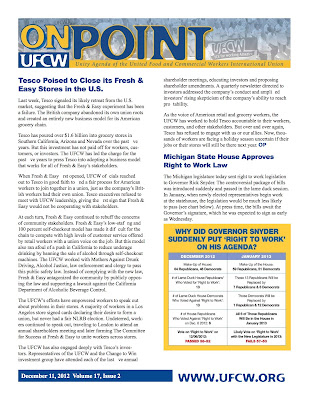 On Twitter: Walmart works with #unions abroad, but not at home in U.S.ow.ly/fUtTs #wmtfail #labor #1u via @washingtonpost@ArchiveDigger

The demonstration came on the heels of last week'sFast-Food Forward protest -- where employees at different fast-food establishments across the city walked off of the job in order to demand higher wages, benefits and the right to unionize.
Fast-food strikers joined forces yesterday with other fed-up workers -- in health-care, construction, security, service industries and other marginalized sectors -- in order to let the rest of the city know that their plight will no longer be ignored.

Michigan's GOP quickly approved Right-To-Work legislation, just hours before it was introduced, spurring protests across the state.  Read more and find out what you can do to help here.

President Obama has spoken out against "Right to Work" legislation in Michigan:


"President Obama has long opposed so-called ‘right to work’ laws and he continues to oppose them now," said White House spokesperson Matt Lehrich. "The President believes our economy is stronger when workers get good wages and good benefits, and he opposes attempts to roll back their rights. Michigan – and its workers' role in the revival of the US automobile industry – is a prime example of how unions have helped build a strong middle class and a strong American economy."


We rarely get to say this, Yahoo! Finance has an awesome spot, "Why We Need Unions After All..."  Watch the short video or read the article, Yahoo!'s economists say, "The pendulum has swung too far..."

The discount private label retailer, Aldi, is rolling out a Premium Brand in the U.S..

Albertsons and Save-A-Lot are rumored to be up for sale.


Previously Cerberus, which owns the Albertsons LLC stores — now transitioning to Albertsons Market — was reported to have been in talks to acquire all of Supervalu, but was unable to secure financing.

The Brit Corporation, Tesco, said they're reviewing their controversial chain, Fresh and Easy.  Speculation has risen that the chain will shut down its' 13 Bay Area stores.  Check out the inside scoop at Fresh & Easy Buzz.

Food Lion announced they have a new President.

#ShockerAlert: Walmart was added to yet another lawsuit surrounding wage and hour violations.

Washington Post has a great article: Walmart works with unions abroad, but not at home...


Its employees are not unionized in the United States, where the retailer has become infamous for its staunch opposition to labor groups. Even in Canada, it closed a store after workers there organized. But in the United Kingdom, Wal-Mart touts a growing roster of union employees and has negotiated contracts with entrenched labor groups in Brazil and Argentina for decades.

“We recognize those rights,” said John Peter “J.P.” Suarez , senior vice president of international business development at Wal-Mart. “In that market, that’s what the associates want, and that’s the prevailing practice.”

Documents now show Walmart said 'No' to paying for fire safety at a factory in Bangladesh, where a fire broke out last month, and over 100 workers were killed.   More at the New York Times.

CNN looks behind the Walmart walkouts and Fast Food strikes, asking, "What gives? Workers are fed up!"


Supermarket News looks at what could be the 2013 Food Trends.

Are you a UFCW / RWDSU member affected by Hurricane Sandy? Apply for assistance from your union now by clicking here.

And finally check out the Nation of Change's coverage of Walmart protests and walkouts. 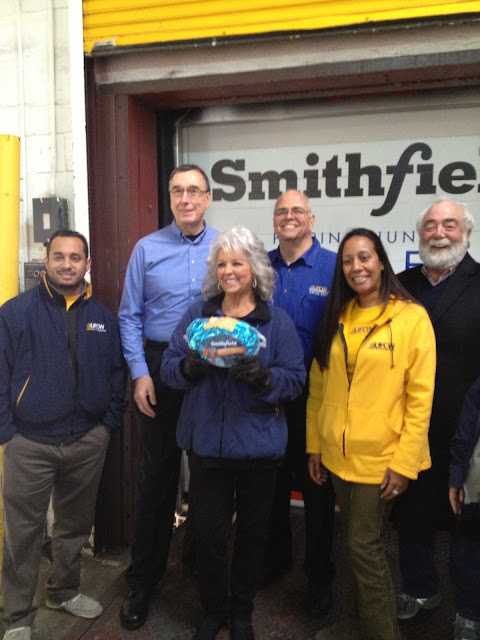 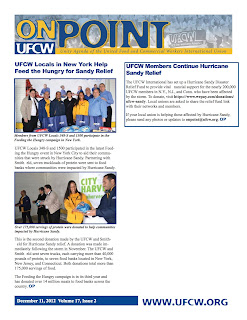 Throughout the last month, UFCW Local 1500 members and staff have been dedicating their time, money and resources towards helping New Yorkers recover from Hurricane Sandy.

DEADLINE TO FAX IN APPLICATION IS DEC. 31!

The following is a statement issued by United Food and Commercial Workers (UFCW) International Union President Joseph Hansen: “Inspired by President Obama’s declaration that we will get through this together, the United Food and Commercial Workers International Union has established a Hurricane Sandy Disaster Relief Fund to provide vital financial support for the nearly 200,000 UFCW members living in New York, New Jersey, Connecticut and surrounding areas."

Additional statement from UFCW Region 1: "The UFCW & RWDSU have collected donations to support our sisters and brothers who have suffered devastating losses as a result of Hurricane Sandy.  The losses suffering have been so extensive that we want to help as many people as we can, understanding that we cannot even come close to making them whole.  Nonetheless, we want to assist the extent that we can.

For members (at the time of the storm) who would like to apply for assistance, they should fill out the form and return it by fax to (877) 440-5009 as soon as possible."

Please fill out the application immediately by downloading it here.   If you do not have access to a fax machine please contact Adam Obernauer at 800-214-1341 or email info@ufcw1500.org immediately. 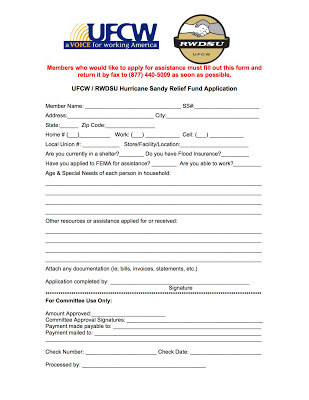