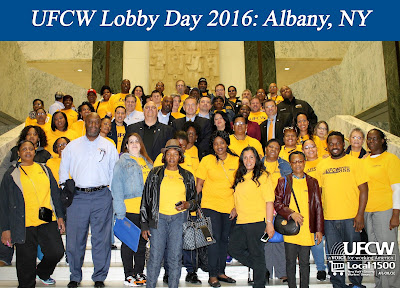 On Tuesday UFCW & RWDSU members from throughout New York hopped on buses to our state capital, Albany. Over 100 UFCW members attended Lobby Day this year, to lobby for legislation to help UFCW families.

Jerome Gomez, who works at Fairway on Long Island, explained why he went to Lobby Day this year said, “We are the voice for the working families. It’s very important that here in Albany, they hear us and our families. We are here to represent our community and our neighborhoods. The assemblymen and women we saw today, they live in our neighborhoods, they need to know and see us representing our community.”

James Williams, a UFCW Local 1500 member from Fairway Market, spoke about his first lobby day experience, “It gives you a chance to actually speak to the people who make things happen for your community. I was very pleasantly surprised the way they took to us and they were open to our ideas and agendas. I’ll definitely be back.”


What We Lobbied For:

Problem: Companies use “on-call” scheduling to force people to work harder and longer and be unaware of their shift until the last moment. These “on-call” shifts require workers to call their employer, often just hours before their shift starts, to and out if they should come in. While there is no guarantee of a shift, the worker is expected to be available, preventing them from attending to other responsibilities.

Solution: S-52/A-261 would guarantee at least four hours of pay (at minimum wage) for workers who are required to contact their employer or wait to be contacted less than 24-hours before their shift starts.  Workers in New York are currently guaranteed four hours of pay each day they report to their job. S-52/A-261 simply closes a loophole that employers are using to avoid this requirement. 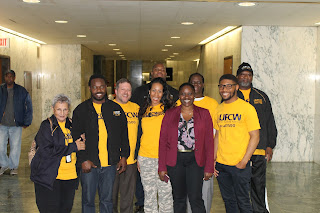 Repeal Minimum Wage Reimbursement Tax Credit S-1280 & A-6532 (also known as the “Walmart Tax Break”)
If an employer in New York State hires a student aged 16-19 and pays them minimum wage, then they are provided with a tax credit of $1.35 multiplied by the total number of hours worked by all eligible employees.

Problems with this tax credit:  All employers are eligible—including: Walmart, McDonalds, etc. n Provides employers with an incentive to hire young workers and pay them low. As of 2013, 90 percent of New York’s lowest wage workers were above age 20. n The New York Department of Taxation and Finance estimates the credit will cost the State $43 million in FY 2016. n Does not require employers to disclose participation or credit received. n The cost of the program is not capped.

Stamping Out Hunger on Long Island 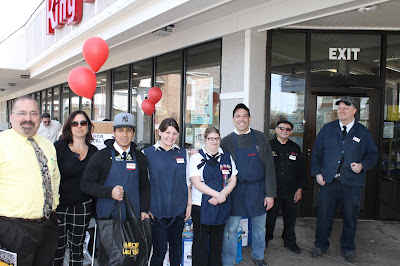 Local 1500 members joined their sisters and brothers from Local 342 to Stamp Out Hunger today in front of King Kullen in Massapequa. Over 100 bags were donated by customers and union members today, and King Kullen donated an enormous amount of canned corn (pictured below) to support local food banks. 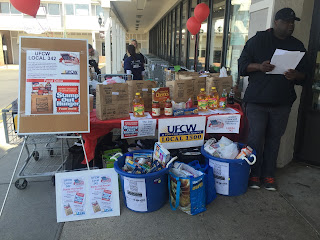 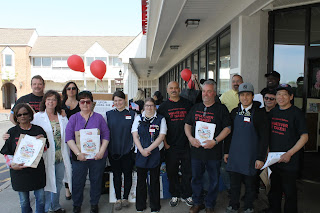 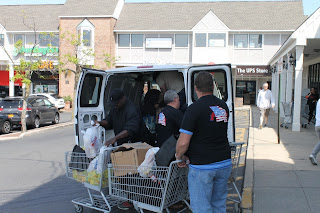 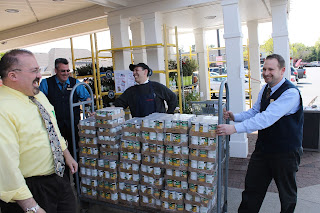 We want to thank King Kullen for the generous donation, our sisters and brothers in Local 342 and all Local 1500 members who participated in this year's Stamp Out Hunger campaign to help local food banks! Great work! Remember that your #StampOutHunger bags will be collected this Sat!

Email ThisBlogThis!Share to TwitterShare to FacebookShare to Pinterest
Labels: stamp out hunger, UFCW

Tony Speelman, a committed labor leader who has dedicated nearly four decades of fighting for hard working men and women, was unanimously elected President of the over 20,000 member United Food and Commercial Workers Local 1500 (UFCW). Robert Newell, who began his career in 1990 pushing shopping carts at Pathmark, was unanimously elected Secretary-Treasurer.

Speelman, who began his career as a Local 1500 member as a part-timer at Dairy Barn on Long Island, has fought for decades to help working men and women attain better lives at work and at home with their families. He has long held irresponsible corporations accountable throughout the New York tri-state region, fighting for better rights and wages for Walmart and Target workers. He has repeatedly fought to raise the standards for all workers because he deeply believes all men and women deserve the right to improve their lives.

“I am honored to represent the proud men and women of UFCW Local 1500, a union I first became a member of when I was 17 years old, ” Speelman said. “We will work together to provide a better life for all Local 1500 members, to provide better benefits, and safer working conditions,” Speelman said. “We will make it a priority to secure better part-time scheduling, so our members can better balance a family life.”

The Local 1500 Executive Board unanimously elected Speelman and Newell on May 11, 2016. He becomes the seventh president of New York’s largest grocery workers union. Speelman began his career working part-time for Dairy Barn stores on Long Island while attending college in the 1970’s. He quickly became an instrumental part of the UFCW Local 1500 membership, fighting for better wages and benefits for his coworkers and their families. At a young age, he served on three contract negotiation teams, leading to win contracts with better wages, benefits and hours for his coworkers. Speelman then joined the UFCW Local 1500 staff in 1986, serving in every union department before becoming Secretary-Treasurer in 2009.

“Our team will bring in a big energy change,” Speelman noted. “We’re eager to and look forward to working alongside community groups, other unions, and our International Union. We are in this together, and only together can we make a significant impact on helping the hundreds of thousands of men and women working throughout New York.  Our team will have a dedicated focus on organizing new stores and helping working women and men better their lives in the food retail industry.”

Robert Newell began his career in 1990 working as a part-time shopping cart attendant for Pathmark in Bayshore, NY.  Newell was instrumental in working to organize Wild by Nature, an organic chain of stores throughout Long Island in the 1990’s.  Prior to becoming Secretary-Treasurer, Newell was previously Assistant to the President of UFCW Local 1500.

"I want this union to become an even greater and stronger union for the decades ahead," Newell said "Our new team will truly make a positive impact on the lives of working men and women throughout New York."

“It’s a neat story," Speelman explained, "I started as a part-timer working nights, Rob started pushing carts as a teenager. It’s because of our passion and love for the men and women in this union that we’re here today. We couldn’t be more proud and honored to lead Local 1500 to become bigger and better." 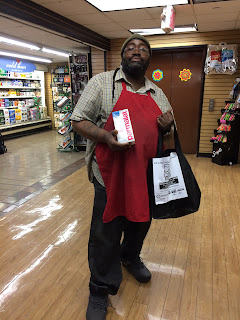 Over the last few weeks, Local 1500 members have been collecting donations and working alongside of communities to collect food for the annual Stamp Out Hunger campaign!

Here in New York City at D'Agostino, it's no different. Local 1500 members have collected over a hundred pounds of food for local food shelters in preparation for May 14th!

You can collect food at your stores drop off some donations at our Union Office, or fill up your bag and leave it at your doorstep for your postal worker to pick up on May 14th! 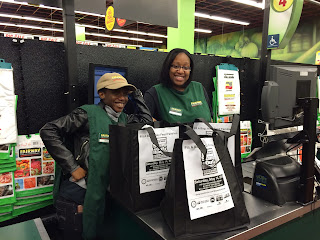 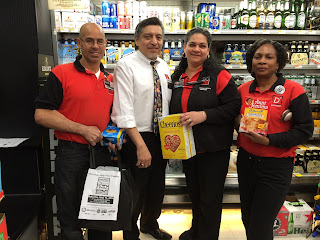 
At his last Executive Board meeting an emotional President Both announced he would be retiring effective May 1, 2016. The rarely publicly emotional President gave a heartfelt speech, “My family has been a part of this union since 1930. As members, and part of the Union staff. This is a difficult day for me to announce we will no longer be a part of Local 1500. I love this union with all my heart. We have the best staff, serving the best union members,” Both said.

After his speech Executive Board member Anthony Drago shared his feelings on Both’s tenure, “Bruce did not have an easy road to navigate as President. The massive healthcare changes and significant legislation that affects union contracts have changed bargaining in the last 10 years, it’s not the way it used to be. He never faltered, though. He stayed strong and never backed down from a fight, always told us how it really was. We respect him and thank him for his service as President.” Bruce first became a member of Local 1500 in the late 1960’s working for the H.C. Bohack Supermarket Company. As a member in the stores, and on Union staff, Bruce has a collective 40 years of service as a UFCW Local 1500 member. 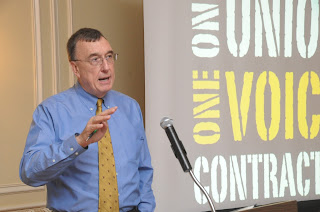 Bruce also brought UFCW Local 1500 to a new union headquarters with state of the art technology, moving the union from a rent-paying tenant in Queens Village, to an owner at 425 Merrick Ave. in Westbury, NY. The new building features a full state of the art Union Hall, where general membership meetings, blood drives, fundraisers, dinners and various other events are hosted.

Bruce finished his last Executive Board meeting with these words, "I am leaving this organization the way I came in, quietly and with dignity."

We thank Bruce for his service as President, and wish him congratulations, and a healthy, happy retirement. Wishes, cards and notes to former President Both may be sent to the union office, addressed to Bruce W. Both.
Posted by UFCW Local 1500 at 5/02/2016 03:00:00 PM No comments: